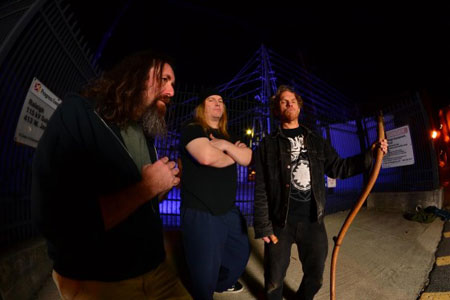 Following their recent performance at the Fifth Annual Scion Fest in Memphis, CORROSION OF CONFORMITY has announced live assaults for August. In addition to their already planned participation at Gwar’s annual BBQ, the trio will perform a headlining show in Wilmington, Delaware before heading to South America for a string of dates. The August shows mark a break from continued work in the recording studio on the band’s new album, expected for release in early 2014.

“We need a little escape from the studio,” comments vocalist/bassist Mike Dean. “We thought it would be good to see the light of the day a little bit. We are excited to play Brazil, Peru, Columbia, and Argentina for the first time ever. Of course returning to Mexico City and playing Gwar’s BBQ will be highlights for our summer as well. The new material is sounding really good but it’s time to get the perspective provided only by playing in front of a live audience. And we are talking about some very live audiences in this case.”

Updates regarding progress of the band’s forthcoming album came during the band’s late April West Coast tour with Danzig. Dean said, “We have a lot of lyric writing to refine but a lot of solid musical arrangements are in place. We plan to begin basic tracking for half the songs as soon as we return to North Carolina.” The initial work on the still untitled album found the band not long out of the recording studio having recently completed their Scion/AV EP Megalodon. The special EP was included free to all customers to the band’s official webstore and is still available as a free download by clicking HERE. Dean notes, “The EP was written, recorded, and released in two months time. It really challenged us in a good way.” In the meantime, fans can check out live footage of the band’s first-ever appearance in Chile at this year’s Metal Fest this past April below.

CORROSION OF CONFORMITY released their self-titled album via Candlelight Records to high praise late February 2012. It was the first new material by the North Carolina trio since 2005. “Corrosion Of Conformity is what you want out of a comeback record: not just a reclaimation of lost vigor but a meaningful update on a vintage sound,” said Pitchfork. “The celebrated Animosity line-up displays a command of style far beyond anything their 1985 selves could have imagined,” added Decibel. The album debuted on Billboard’s Top 200 chart at position 157 and impacted CMJ’s Loud Rock chart at position 8 on its debut week before working its way up to the top spot. It remained on the magazine’s popular radio chart Top 10 for eight weeks.

Formed in Raleigh, North Carolina in 1982, CORROSION OF CONFORMITY quickly transformed heavy music. The band has influenced countless new bands and today remains humble about their accomplishments. To date, the band has sold over 1.1 million albums in the United States and continues to find new fans via non-stop touring. 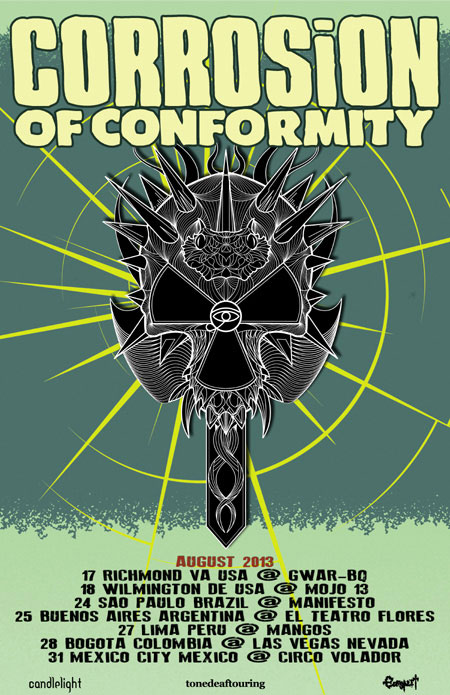