Roadburn headquarters are in a euphoric state as we report that West Coast stoner metal legends Sleep have been confirmed as the headliner at Roadburn Festival 2012. Sleep are irrefutably a seminal band of the stoner rock scene and to our elation they are coming to their spiritual home of Roadburn to anchor the 2012 festival.

Featuring original members Al Cisneros and Matt Pike together with drummer Jason Roeder of Neurosis, Sleep will be playing (a one-off show) on Saturday, 14 April 2012. Al Cisneros will also be appearing with OM together with Emil Amos and Robert A.A. Lowe, bringing their hypnotic vibrations to Roadburn‘s mainstage on Thursday, 12 April.

“Sleep are honored to attend the Symposium of Iommic Research, Tilburg at the 17th Annual Roadburn Festival” – Al Cisneros. 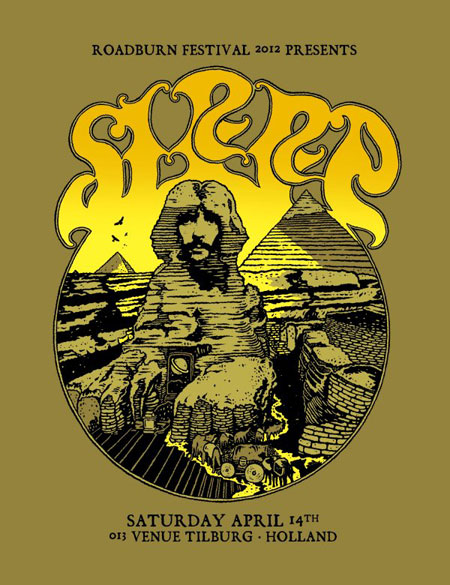 We at the Roadburn Festival consider Sleep to be among the most important bands influencing today’s thriving stoner / sludge / metal scene. Their vision to combine the powerful riffs of Black Sabbath with the outsider ethics of punk rock turned into an unstoppable amalgamation, one that catapulted them to international attention  within a very short time. Their rapid rise and unquestionable musical significance is a testimony to the fact that they tapped into something that resonates inside virtually every fan of stoner metal today. They truly embody the spirit and power of The Riff.

Formed as a Bay Area punk rock band called Asbestosdeath, the band changed their musical direction and name and debuted as Sleep with their “Volume One” album in 1991. After Justin Marler left the band, the core lineup of Al Cisneros, Matt Pike and Chris Hakius went into the studio to record a demo cassette that they sent to Earache Records. The recording was released in November 1992 (exactly as received by the label) under the name “Sleep’s Holy Mountain” and went on to forever alter the musical  landscape. Countless current bands cite “…Holy Mountain” as a major inspiration, and the unique sound and style of the record can be heard  in many subsequent releases by bands from all over the world.

“Sleep’s Holy Mountain” created such a buzz that major label London Records signed the band. Unfortunately, the label lacked the vision necessary to actually follow through and release the album that Sleep recorded, mostly because it took the not-radio-friendly form of a single song — a 63 minute long ode to weed — called “Dopesmoker.” Sleep returned to the studio and edited the track down to 52 minutes  and retitled it “Jerusalem”, but it was again rejected. London Records shelved the record and dropped the band, leading to their dissolution.

Luckily, the record had a life after death and refused to stay buried. It first saw the light of day as the shortened “Jerusalem” version  by The Music Cartel in 1998 before “Dopesmoker” (at its full 63 minute length) was given a proper release by Tee Pee Records in 2003. “Dopesmoker” stands as one of the towering achievements in recent metal history, a mesmerizing, intoxicating, and incredibly complex song that is still unrivaled in the annals of stoner metal.

The band’s breakup, while devastating for fans, turned out to have a silver lining as Matt Pike went on to form High On Fire, a metal juggernaut that has authored five albums to date, and Al Cisneros went on to form OM who have released four albums to date. Roadburn is extremely charged to welcome OM to the festival’s main stage on Thursday, April 12th, 2012. Al Cisneros, Emil Amos and Robert A.A. Lowe – their spellbinding sound represents the ultimate synthesis of stoner riffs and mantra in music today.

Roadburn Festival 2012, including Voivod‘s special event, will run for four days — from Thursday, April 12 to Sunday, April 15 (the traditional Afterburner) at the 013 venue in Tilburg, Holland.

A Storm Of Light To Set Roadburn Festival 2014 Alight