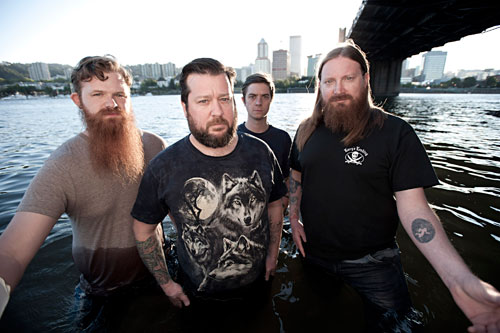 DIESTO, one of Portland, Oregon’s longest running stalwart heavy acts, embodies the city’s tumultous history from uncharted territory to stump town to drug den to beacon for all that is heavy. With well more than a decade of forays into the seedy underbelly of shitty city life and explorations of desert desolation under their belts, DIESTO embarked on a back-breaking expedition headlong into the dense Cascadian wilderness and out to the ancient ocean. On their fifth LP For Water Or Blood the band carves out its own territory in the Pacific Northwest’s long tradition of melancholic doom: long, devious deepwoods soundtracks of thunderously heavy dirges, cyclic riffs, escalating duel guitar lines, dramatic shifts, noisy bursts, and evocative laments.

And today, The Sleeping Shaman is proud to be streaming the track ‘Sirens‘, lose yourself in the heavy prog stylings below.

DIESTO formed in 2000 when a Minneapolis transplant scrounged a quick-and-dirty crew to foist the Midwest and East Coast noise rock of his youth on an unsuspecting Portland. While their first two records Outland and Doomtown 7 trafficked in the pulverising vein of fellow travellers Unsane and Today Is the Day, as years passed DIESTO‘s sonic pallette expanded, allowing for breaths between the beatings—albeit at first just gasps, but eventually long and deep. Their evolution from noise rock batterers to dexterous doom titans can practically be charted over the course of the “honest, moving brutality” (Hellride Music) of album number three, Isle of Marauder. On their fourth album, High as the Sun—“an album that none who hear it will likely soon forget” (All Music). DIESTO staked its claim in the high-and-dry plains of elliptical western doom with its “fantastic layers of guitar work, subtle psychedelic touches, and well-placed periods of heaviness” (Lambgoat). Now, bolstered by a new rhythm section of adventurous young bloods, DIESTO heads west over the hills and into the forested mountains toward the sea with expert skills and only the barest of essentials.

For Water Or Blood begins its long and winding mini-Odyssey through the heavy frontier with “Trail to the Sun,” its persistent riff evoking a Cascadian “Kashmir” as the band sets off on its first three-song cycle of six-minute slogs. “Edge of the World” chops through the chunky underbrush, occasional discordant guitars ripping trunks from roots. “The Road” calls out to no one, intertwined guitars pulling, bass and drums pushing forward to eventually summon a burst of speed that launches them headlong into the void. The sojourn continues with a companion three-song-cycle: past the beckoning hooks of “Sirens,” under the crashing waves of rock on “Adrift at Sea,” and trudging back home up the sludgey “Dirty River.” The recording by Adam Pike (Red Fang, Norska, Nether Regions) at Toadhouse showcases the band’s live prowess and love of pedal-free amplifier tone—songs tracked live and straight up with minimal overdubs—making For Water Or Blood an arduous but adventurous journey into the unknown using the wisdom of the ages. Go west, young man. 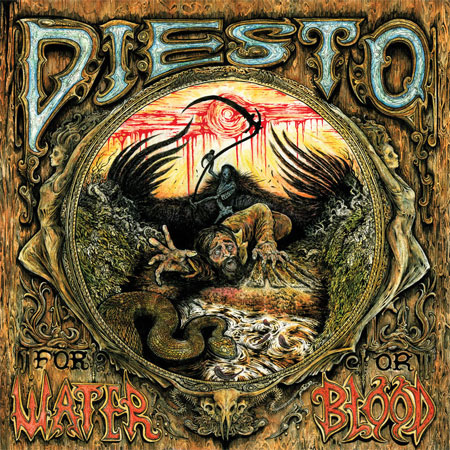 For Water Or Blood is set to drop on August 27th via Eolian Empire and will be available on 180g Vinyl and Digital formats.