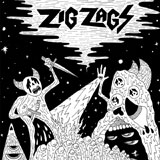 Rock and roll should be raw, raucous, rowdy and righteous. If it ain’t any of these things it has no business being called rock and roll in the first place. Fortunately Zig Zags are all of these and could probably find a few more adjectives beginning with R to describe them.

Information on Zig Zags is scarce, what is apparent is that they are American, have released three 7” singles previously in their homeland and have collaborated on a track with Iggy Pop. This new release is their first in Europe and pulls together the A sides of two of their previous singles. Probably the most telling thing about the band is the fact that they have worked with Iggy Pop as the Zig Zag sound is a murky, hypercharged collision between Stooges fuelled destructo rock, Blue Cheer powered acid blues and Hawkwind’s tripped out spaciness.

“Scavenger” kicks in on a monster rush two note riff that is equal parts “Master Of the Universe” and “1969” before all Hell breaks loose and the band tear headlong into a speed driven, punk blast that will pin you against the wall and stare you the fuck out!!! Flip the plastic over to the other A side and “Monster Wizard” tames the energy but ups the psychedelic quota in favour of some big, flabby Sabbath meets Monster Magnet riffs and a whole slew of Dave Brock approved swirling effects.

Two tracks and it’s all over…but it’s good enough to spin right back over and start again straight away…which is exactly what I’ve just done. With quality releases by Hot Lunch, Katla and Wild Eyes to name but a few, Who Can You Trust? Records are fast becoming the go-to label for fuzz drenched, balls to the wall garage rock and roll and in Zig Zags they’ve successfully added yet another quality piece of wax to an already fit-to-bust catalogue of awesomeness. You all want to buy this, you need to buy this…YOU WILL BUY THIS!!!! 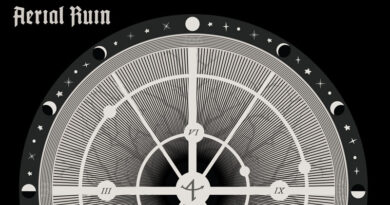