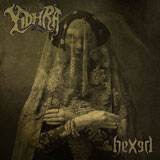 Name your band after a deity from the Cthulu mythos and people take notice. Follow that by allowing your songs to pay tribute to the horror classics and conjure mental images of Lovecraft and Poe and you are wetting the appetite even more. Throw in that it has been recorded and produced by the legendry Bill Metoyer and you’ve certainly built up expectations that the listener will be in for a mysterious, twisted ride. Los Angeles-based Yidhra do this successfully, and, with these expectations built, I delve into the follow up to their self-titled EP soon to be released on Black Eye Media Doom Division ‘Hexed‘.

Opener ‘Witch Queen’ begins with creepy swirling Theremin and a nice chunky bass tone from Thomas Harris, building after a few minutes into groove laden Kyuss meets Sleep instrumentation with gravely Pike-esk vocals, returning to the Skeleton Gong-like stoner/doom groove of the intro. With bass and drums keeping a solid rhythm, a Dave Krocker solo flows into a chanted mantra of “Yidhra”, which leads into second track ‘Oath Breaker’. Undulating bass gives way to a metallic chug that could be lifted straight off “Blues For The Red Sun”. Solid drumming by Chris Hannan and Ted Venemann’s reverb-doused vocals see off the remainder of the track.

Next track ‘Blood Is The Harvest’ shows more of Yidhra’s obvious Kyuss influence, infusing gravely vocals into the now familiar groove, and by the time ‘Raven’s Flight’ begins, I’m beginning to wonder if these guys have anything else in the cannon. I was expecting a darker and, dare I say it, occult feel with the abundance of references to the elder gods and shape shifting creatures; maybe it’s just my own tastes, but the earlier promise of the first song seems to have fallen away into standard stoner metal to these ears. A traditional epic metal riff catches the attention, and seeing as I’ve another 30 minutes, I’m holding out in hope of reprise.

An album of Lovecraftian ‘doom’ wouldn’t be complete without a tribute to Electric Wizard, which can be heard throughout ‘Ancient Ones’, but the band eschews fuzzed out psychedelic heaviness for bad metal riffs and quite horrible vocal effects. The ‘new’ metal sound continues on ‘Conquest For Nova’, any atmosphere build by the previous track is destroyed by another bouncy Kyuss riff, broken up by chugs and pop metal sections. By the time ‘Mai-Cob’ is reached I’d wholly forgotten that one of the members is on Theremin duties, as it is completely lost in the thick tones produced by the rest of the band.

‘The Lament Of Longinius’ passes and ‘Dagon’ finishes the album with spoken word that remind me of the superior Clutch. All in all, if Yidhra can avoid the over use of the Kyuss gallop, develop the slow, heavy traditional doom that they genuinely show hints of at times on Hexed, and condensed their songs into a more concise album, they would be more impressive. The lack of overall atmosphere brings the riffs to the fore, and with that the album stumbles along the road of stoner metal, alongside many more of their ilk, searching for original riffs that will elevate them from an otherwise bloated genre.