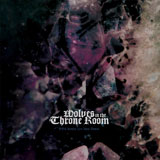 The arrival of Wolves In The Throne Room seemed to give rise to a whole bunch of new black metal bands expanding on the genre; incorporating post-metal, doom, and even shoegaze into their sound. WITTR’s hypnotic and long form approach to song writing opened up a space for a whole new school of black metal bands more defined by the melancholy and meditative than outright rage or the deliberately controversial. From the pummelling drone of Fell Voices to the blissed-out and blackened post rock of Deafheaven, there is definitely a type of black metal now that exists separately from the progenitors of the genre, and the more commercially successful bands that have come about since. Whether Wolves In The Throne Room inspired a whole new set of bands to play a different sort of music or simply opened it up to a wider audience, it would be difficult to overlook their impact and importance in the recent expansion of black metal, and its gradual emergence out of a tightly defined and closely guarded genre into acknowledgement and adoration from non-metal critics and audiences.

‘BBC Session 2011 Anno Domini‘ is comprised of ‘Prayer of Transformation’ and ‘Thuja Magus Imperium’, the closing and opening tracks from their last studio album ‘Celestial Lineage’. Following the near perfect ‘Two Hunters’, 2011’s ‘Celestial Lineage’ was a more subtle development of Wolves In The Throne Room’s sound, featuring even more of Jessica Kenney’s hauntingly beautiful vocals, keyboards, chanting, static drenched synths, bells and chimes, and all sorts of light touches that made it the most nuanced record they’ve ever released without losing that key mix of Weakling style progression and the raw influence of early Ulver and Burzum. They also pulled the album out into more separate tracks than on previous releases, exploring existing ideas in a more focussed way to deliver a record with numerous reference points and a greater textural variety than before.

The tracks from the live session recorded at the legendary Maida Vale Studios on ‘BBC Session 2011 Anno Domini‘ prove that when Wolves In The Throne Room play live they can achieve that densely layered atmosphere, that when you listen to their studio albums you assume is in no small part down to slick production and hours of tinkering. There are differences between these live tracks and the album versions of course; most apparently the guitars seem to have more bite, the drums are louder, the vocals are more prominent and the lyrics more tangible on these live recordings. But in a way these renditions are such near unblemished reproductions of the original recordings, it might only be the die-hard fans that will want to own a copy of this record – but that’s exactly what this is; with a strictly vinyl-only release on Southern Lord, this one is really for the die-hard fans and completists.

When central members Nathan and Aaron Weaver declared Wolves In The Throne Room on hiatus so that they could concentrate on their lives on the farmstead they moved to in 2003, it was thought that ‘BBC Session 2011 Anno Domini‘ might be the band’s last ever release. The good news is that very recently they announced plans are in place to record another studio album in 2014. Given the already impressive back catalogue of the band, it will no doubt be on a lot of people’s most-anticipated-releases lists for next year; and if ‘Celestial Lineage’ was the final part of a trilogy it will be all the more interesting to see what they do with the next record. Whether you’re a fan or not, you’d be hard-pushed to name another black metal act with as much vision and ambition as Wolves In The Throne Room, and when you can say that of a band, there’s every reason to be excited about what’s coming next.