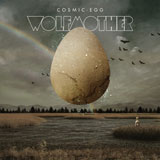 I have to admit, when Wolfmother’s debut album dropped in 2005 I was pretty taken with their take on the proto metal sounds of the late 60’s/early 70’s as so many others seemed to be. After a while though I did grow tired of their fey Led Sabbath styled rock and found a multitude of bands that do this kind of thing so much more convincingly.

The intervening four years have seen front man Andrew Stockdale abandoned by his rhythm section and left to fly the Wolfmother flag alone. That he has now found a rhythm section to surpass the original and expanded the line-up with the addition of a second guitar without losing any of the core sound of the band shows that, maybe, this is something of a one man affair. I was then expecting (and I will admit in no small way hoping) that this second album from the band would be total shit. I’m sorry to say it isn’t.

This is still very much Wolfmother but in many ways a tighter more focussed version. It would have been easy for Stockdale to take the improved musicianship and the expanded sound possibilities and produce an album of over the top pompous rock but if anything some of the more “out there” excesses of the first album have been trimmed to produce a 13 song set of catchy, heavy retro rock all wrapped up in a lovely warm and thick production.

Things certainly start off in fine riffing style with California Queen which belts from the speakers with more drive that the whole Grand Prix circuit. New Moon Rising is an obvious choice for a single with its soaring and immediately memorable melody. The title track breaks out the boogie and In The Morning could be The Beatles jamming on Led Zep’s Kashmir.

With only one exception this is a very solid collection of tunes that crib from the best…Sabbath riffs give way to Led Zep style grandeur which in turn gives way to some experimental Beatles hued psychedelia. Far Away, however is an execrable pile of cack that sounds like Oasis playing some God awful 80’s power ballad. Anyone buying this album on vinyl should immediately take a hot chisel to this track…thank fuck for skip buttons on CD players!!!

By no means an exceptional nor an influential album but certainly an album that’s strong enough for the musically adventurous and kick ass enough for those that just want to rock out. Will it outstay its welcome as the first album did? Only time will tell but for now it brings the riffs…and that’s what I need right now.

All Pigs Must Die ‘Nothing Violates This Nature’ CD/LP 2013