Back in June of twenty twenty I was given the task of reviewing the album Doom II, for the band/ project Witnesses, the brain child of one mister Greg Schwan. It was an immense release to say the least, an epic seafaring tragedy album, written, created, and released by the man himself. It was received to critical acclaim, and really showed just what was possible, and could be achieved if you combine talent and a creative mind, in a constructive way. I personally was left astounded by what was achieved, and ever since I’ve been watching just where Greg’s adventures would take him next.

We have conversed several times over the last few months, there was talk of another project in the pipeline, something as far removed from Doom II as was possible. Described as being more ‘ambient’, the thought of a new project seeing the light of day any time soon didn’t feel like a reality. Well, I was wrong. February of twenty twenty-one sees the release of this new opus, and I have been fortunate enough to return to Witnesses for another adventure, courtesy of Greg.

Completely unprepared, I was sent the album, and a warning…this isn’t anything like Doom II was, I hope you dig it. The beauty of writing for The Sleeping Shaman is that its run by an extremely open-minded person, who can appreciate, and embrace all of the music that comes out, across all of the more obscure and extreme genre’s, and is always happy to give things a go. With that in mind, any worry of it not fitting The Shaman demographic was gone, and it left it open to give an honest review of a project, no, a work of art, that needs to get the credit for which it truly deserves.

By its nature, it’s the equivalent of a movie score, and over the twenty tracks, it tells a story. There’s no set-in stone sequence of events to follow, it’s all open to interpretation. After speaking extensively with Greg upon listening to IV, it turns out that the musical narrative works in a way that makes it easier to join the dots, and create your own story from the pieces. And, as it goes, it turns out I wasn’t far off the path with the narrative I’d given it. So, a bit of imagination can go a long way!

The feel is dark, dank, and oppressive. It’s as if you’re witnessing a crime unfolding, like there’s been a murder…

For me, in the way it plays out, reminds me of a musical monologue of a murder mystery film, or television series, and wouldn’t feel out of place as the soundtrack to a Scandinavian style drama series you might find on Netflix. The feel is dark, dank, and oppressive. It’s as if you’re witnessing a crime unfolding, like there’s been a murder. It has all of the hallmarks of a gritty suspense film, which could so easily translate into a visual piece too. Maybe something for the future perhaps, who knows?

As you listen through, you draw your own conclusions, and just as I’m sharing mine with you, you may well reach a different outcome if you give this the time it deserves, and let your mind wander too. When I listened through, I took notes of what I was imagining, and by the end I had a whole storyline written. I’m not going to share that with you here, I would much rather you check out IV, and do some investigating yourselves.

What I took from it was this…

What starts as one plot, in my mind, actually turns into a tragedy, and as it plays through, and in the way it’s crafted, all fingers point one way, only for it to turn a different way completely later on. The skill in the arrangement and concept really catches the imagination, and even with the twists, how it changes your thoughts, and mood, is just incredible. By the end of it, I’m left satisfied in the outcome, and also a little sad, but equally happy that it resolves itself how it does.

Like I’ve stated, this isn’t just an album of tunes, it’s more of an artistic experience, through the medium of sound, and needs to be treated as such. It has an eerie feel to it, all the way through, and even in the simpler moments, the notion of oppression and loss is overwhelming at times.

I will warn you now, it isn’t a heavy album, so don’t expect any blasting tunes. I wanted to review this, and share it with you, because I felt that it needed some exposure, and if nothing else, this needs to be out in the world, and appreciated by the masses.

In a world gone mad, to find an escape can only be a good thing, so here, to take you away, is Witnesses IV, enjoy… 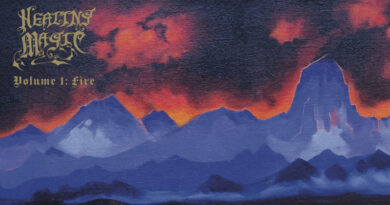