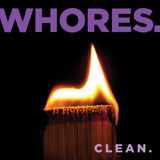 That’s all lies, of course. Their last record, Ruiner, was a sludgy combo platter of bloody-nosed hardcore and broken-amp noise-rock (grunge anyone?). ‘Clean’ follows the same slash ‘n’ burn methodology – just try and listen to this band without thinking of early 90s skull-splitters Helmet and possibly Big Black (the last track on Songs about Fucking is called ‘He’s a Whore’…) The band make no secret of the fact they idolize Steve Albini and Page Hamilton– a quick visit to their Facebook page will tell you that. But it’s the fact that their music has the same vital, corrosive energy that makes them so appealing.

The record kicks off with ‘Baby Bird’, which rides a ‘Milquetoast’ bass throb (bassist Jake Schultz is my new hero) into a pool of six-string visceral muck. “I’m going out tonight and I don’t care who knows” shout-barks vocalist Chris Lembach, doing his best Page Hamilton impression. ‘Baby Bird’, like ‘Daddy’s Money’ from Ruiner, builds from the bass up – something curiously lacking in modern noise rock.

Second track ‘Last Looks’ kicks off with another Gross-O-Matic guitar riff, veering dangerously close to Bleach-era Nirvana, then collecting itself for a palm-mute shred pre-chorus – and Lembach growls through (hopefully authentic, non-digital) distortion about not being able to ‘get it right’. The track, thankfully, is allowed to stew before the chorus kicks out some more jams.

‘I Am Not A Goal Oriented Person’ is the highlight of this mini-album, it’s got a thick dollop of Jesus Lizard nastiness – and check out the bass hammer-ons and bends – it’s a total beauty. It kicks you in the balls and thanks you for your time. Catharsis.

Travis Owen’s drums pound you like an alcoholic stepdad throughout, but it’s on ‘Cougars Not Kittens’ that you really get to HEAR what he is doing to that poor kit. It sounds as though he’s playing a rented kit, purely because I wouldn’t fucking hit my own skins like that. It’s got a curious High on Fire/Neurosis sludge vibe that will tickle the fancy of Melvins fans. ‘Cougars…’ ends with a total guitar meltdown, it squeals and screeches, and sounds like a hostile alien life form is tearing sheet metal apart for kicks (one for the headphones).

‘Blue Blood’ goes back to Yow-land to shred you for a couple minutes while they gear up for closer, ‘I Am an Amateur at Everything’ – there’s a performance of this tune live at St. Vitus in NY where they play loose and it rules – and it’s the best closer they could go for. It’s the thickest, chunkiest tectonic-plate-riffed fuzzmonkey they’ve ever made.

The only downside – and believe me I’m clutching here- is that I can easily imagine Helmet fans crying ‘plagiarism!’ into their Betty LP sleeve. But don’t let that faze you, Helmet fans – sincerest form of flattery etc.

Whores aren’t original (who is?) but if you’ve got any passion for noise rock, these guys are worth checking out. The record flies by, I assure you – and if you pair it with Ruiner (both EPs run at about an hour back-to-back), you’d have a better album than the last couple of ACTUAL Helmet records. What more could you want?