With the sheer volume of heavy rock & roll I consume in all its myriad of forms, I’m routinely due for an aural palette cleanse. I regularly find myself listening to mellower music on Sundays, or later in the evening, after the kids are asleep when I’m working on artwork. I’ll routinely explore jazz, blues, or more acoustic, introspective tuneage. Veldune, a new project featuring Jamie Myers (Hammers of Misfortune and Sabbath Assembly) and her Sabbath Assembly bandmate Kevin Hufnagel (also of Dysrhythmia and Gorguts) will definitely fit on that playlist. Veldune put forward an introspective, late night ‘driving music’ aesthetic, as the band name drops Chis Isaak and Concrete Blond in the press I’ve read, and those are totally fair sonic comparisons.

For one thing, Hufnagel’s guitar isn’t what he’s displayed in Gorguts & Dysrhthmia. His playing is mostly sparse with a clean, echo-y tone, conjuring later-night meanderings. Like the opening track, The Night Is For Dreamers, and Willow Sways, displays this approach very effectively, and on first single Chasing Down The Sun, Hufnagel is able to really take the listener on a musical journey, delivering the perfect notes, at the perfect time. As well, Hufnagel layers tasteful, single-note shred, not only here, but throughout the entire whole of Veldune.

On A Glimpse Of Being Hufnagel’s note choices flow parallel with Myers voice, perfectly complimenting her tone, as Veldune builds the song up, displaying one of the few real tempo changes throughout the record. Yearling Thunder is a late-record epic, a slightly up-tempo change of pace, featuring great drumming from Jeff Ebe (also of Dysrhythmia), who shines throughout Veldune as does bassist Johnny DeBlase (also formerly of Sabbath Assembly) who’s driving, thumping bass really propels the aforementioned Willow Sways, and on This Time Around he sits right in the pocket, totally in sync with the guitar and drums while simultaneously seeming to lead the entire song.

If you’re looking for a great, mellow, late-night driving rock record, this will more than satisfy your appetite…

And then there is Myers. What to say, other than she sounds stellar throughout the record, her voice sounding both commanding yet ethereal, simultaneously floating above the music and leading the charge. She puts her vocal capabilities on display right off the bat with The Night Is For Dreamers, instantly commanding the listener’s attention. Here, Myers sounds vulnerable and elegant, and where on Chasing Down the Sun her voice fluctuates between commanding and graceful, sometimes in the same verse.

If I’m nitpicking, the tempo is mostly similar throughout, and I found myself wondering where the dynamics or the hooks are. A few of these dreamy songs built up, and I waited for the big payoff, that usually didn’t happen. It felt that the big, epic, soaring chorus, that Veldune, and Myers in particular, seemed to tease throughout so many of these tracks never materialized. It threw me off a bit on initial spins, but again, I’m nitpicking, and in retrospect, it’s a positive that Veldune didn’t follow any sort of formulaic rock song approach on Veldune as it makes these songs more impactful.

Veldune is a good, well recorded, well-performed record of dreamy, late-night, lonely highway, driving music, and introspective moods. All four musicians sound fantastic, but both Myers and Hufnagel’s musical connection, as well as their talent being front and center. If you’re looking for a great, mellow, late-night driving rock record, this will more than satisfy your appetite. 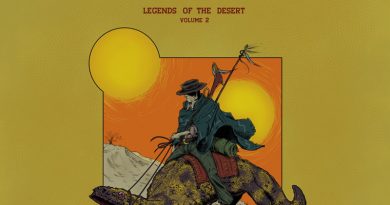 Review: Legends Of The Desert: Volume 2 – The Penitent Man & Cortége