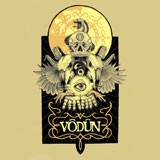 “Voudoun has given woman, in the figure of Erzulie, exclusive title to that which distinguishes humans from all other forms: their capacity to conceive beyond reality, to desire beyond adequacy, to create beyond need…”

The quote which announces the arrival of London voodoo triad Vodun upon the eyes and ears of Bandcampers and Facebookers everywhere rings out brazenly, cryptically and truthfully. There’s something secretive and sacred within their debut EP ‘Eat Up the Sun’ which relies on the primal passions, skills and emotions that only the female of the species can empower other beings with. Yes, what this new band brings us is metal and yes it is heavy, but fortunately despite having just this EP, the new single ‘Oya’ and a handful of gigs to their name so far, Vodun already have so much more to offer than yet another bunch of blokes wearing black band t-shirts trying to be the next reincarnation of Mastodon. To establish quite why, we first need to step back a couple of incarnations ourselves…

Soul-funk vocalist Chantal Brown (Oya) and punk-infused drummer Zel Kaute (Ogoun) first came together along with three-stringed guitarist Marek Steven to form a genre collision-course known as Invasion. Marrying Steven’s love of rapid proto-stoner riffing, Chan’s colossal vocal range and love of wizardry-related lyrics along with Zel’s taut, bombastic rhythms and pyromaniacal approach to performance, Invasion were utterly unique and enthralling in every dimension. However, reaching a crossroads in both their interests and direction after just one album (the glorious, lazer-beaming ‘The Master Alchemist’) the band shook hands and parted ways in 2011 just as their spells tremorred around through London’s musical underground. If you missed out on them, unlucky – they ruled. With Marek forming trad-doom warriors Amulet, Zel drumming away in punk riot squad Pettybone and Chan returning to choir singing, a reunion seemed unlikely. Thankfully, realising their unfinished business together and a mutual longing for some brutally heavy grooves, Chan and Zel were reunited once again by a guitarist: enter six-stringer Ollie (Ghede) to complete the spell.

To say that Vodun capture the individualist style and fuzzy, energetic vigour that Invasion once bled doesn’t really give either band full justice towards the two bands’ unbalanced remits. That said, it’s not a comment that’s all that far from the mark either. Ghede’s rough-cut yet sonically precise guitar-work brings light to some gloriously destructive riffs, whilst Ogoun’s short-sharp bursts of frenetic, encapsulating percussion keeps the majority of ‘Eat Up the Sun’ hurtling towards the cosmos at a desperate speed. Topping it all off, Oya’s incredible talent behind the mic sparkles and remains at the forefront of the band’s sound and vision throughout all seven tracks. Vodun feel more like a tribe than a rock band; by committing to their live performances literally clad in Amazonian body-paint and evil-battling stage costumes, they possess a genuine edge as they blast off into the unknown fringes of fuzzy psychedelia.

Put simply, ‘Eat Up the Sun’ is a startlingly and encapsulating debut. The title track’s surf-guitar oodlings between some E-string hammering riffs are as inventive and thrilling as Oya’s glorious Aretha Frankline-esque wail. The snotty punk aplomb of ‘Red Flag’ and the Afro-stoner mantras of ‘Aida Wedo’, which sounds like The Sword leading a musical summer camp in the Congo, stand toe-to-toe with the jagged staccato grooves and Motown-borrowed vocals of ‘Erzulie’. Mid-record interlude ‘Bondye’ is like one of the Easter-Egg teaser tracks you’d find stashed away inside some secret compartment on a Queens of the Stone Age record with its wobbling bassline, lap-steel tuning, jam-room-loose drums and bafflingly abrupt sense of direction.

It’s not until the hulking ‘Mawu’ and the otherworldly ‘Zaka’ though that Vodun truly spread their wings and allow their songs to fully unfold over several minutes. The former showcases Ghede’s penchant for sharp, beefy slabs of turbo-edged groove which plateau out into a chugging breakdown (imagine Fu Manchu writing the soundtrack to an Indiana Jones film) and a racing finale ensues as Oya’s throat opens up into beautiful passages of eloquent hymn. Closer ‘Zaka’ relies more on Ogoun’s solid, rolling snare assault before collapsing into Oya’s basement of morbid, baritone scaling and culminating in a wall of wailing and crushingly spacey feedback.

Vodun are not a band I’d be comfortable accompanying into a dense, deserted wood after dark. That said their slick voodoo charm is infectious, intriguing and one of the most exciting new sounds I’ve heard all year. Their bandcamp-based EP temple is free to enter, so grab the closest flaming torch, bat away the cobwebs, lock the door behind you and join them as they first summon and then banish the many evils of this realm. 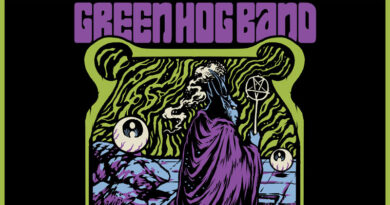 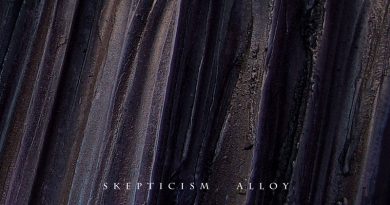