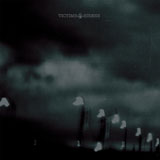 Since their inception back in ’97, Victims have been bridging the gap between hardcore punk/crust/d-beat and the rest of the metal world. Even for the most pedestrian of crust fans, Victims are undeniably one of the most accessible bands of this genre. While most metal fans may shy away from the pacier, more aggressive subgenres due to their political agenda and/or stinky fanbase, Victims offer out a welcoming hand of catchy hooks and a discography that isn’t overwhelmingly longer than your arm. Sirens is the Swedish four-piece’s sixth album in almost 20 years of existence, and this modest back catalogue of full lengths sits alongside two EPs and splits with Acursed, From Ashes Rise and Kylesa.

Sirens opens with Walls, which starts off with distorted amp noise before diving straight into the action with 80s d-beat riffs and aggressively barked vocals, courtesy of Johan Eriksson. For a hardcore punk record, Sirens displays a decent variation of tempos, managing to switch it up between slow, mid-paced and fast passages without ever compromising on raw aggression. The cleanliness of the production quality allows for clarity on every single gang chant, such as “Never give up! Never give in!” on Promises and every tremolo picked riff that this record has to offer.

While there is an inescapable 80s American hardcore feel to this record, it’s kept modern and up to date by the production, provided by Fred Estby (Dismember, At The Gates, Refused) and Brad Boatright (Iron Reagan, Nails, Integrity). The fact that both Fred and Brad were involved with the recording and mastering of Sirens explains an awful lot about the accessibility of this album as, while it is most certainly an adrenaline fuelled ride of d-beat fury, it’s also immensely catchy and not as dirty sounding as many of the other bands that reside in this genre. On certain tracks, such as Ashes, it’s possible to clearly hear every word sung/screamed and every note played which is most certainly a rarity for any hardcore punk band.

The real life lyrical themes lend a darkened shadow to some of the more upbeat sounding songs, such as Errors and Questions, however, this will do little to impact upon the infectious fist pumping atmosphere that this record invokes and Sirens will no doubt sit well with its audience whether they’re long time veterans of the hardcore genre or just having their first taste of what hardcore punk sits like. An easy going and accessible d-beat jaunt, but one that will grab you by the balls regardless.