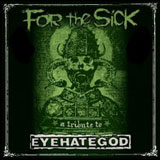 I heard a while back that this was being complied, and was more than chuffed to find it was available and I was able to get hold of a copy. I remember vividly my first introduction to this twisted bunch back in the early 90’s when I was tape-trading with a Welsh guy called Dave who used to run a zine called ‘Crawling Chaos’ (anybody remember them?), indeed Eyehategod where interviewed in the first issue. Anyway Dave had put me a few tracks from ‘In The Name Of Suffering’ on the end of a tape he had done me and I was blown away by what I heard. It was the most fucked-up and hate filled music I’d heard at the time and needless to say the request for my next trade was the full album. I also remember with fond memories stood in a basement at The Roadhouse in Manchester grinning like a Cheshire Cat when I finally got to see them live in 2002. I suppose you could say I’ve always held this band in high regard, as the bands featured on this tribute no doubt have.

The release is a beautify crafted double CD featuring a colossal 34 bands paying homage to these drug addled, alcohol drenched maniacs, and rightly so. Hell I would have chewed my right arm off and posted it to guys responsible for this tribute for the honour having Volition on it. As for the bands who received the honour, some of the more well know ones include Unearthly Trance, Brutal Truth, Raging Speedhorn, Sourvein, Alabama Thunderpussy, Ramesses… shit the list goes on. A good indication of the affection felt for this band and indeed the influence they have cast on dirt worshipers over the entire globe.

As there are so many tracks covered here, a hell of a lot of Eyehategod material is featured. I will just mention a few of my faves. Alabama Thunderpussy do a sterling version of ‘Godsong’ minus the Manson samples, but with some great guitar work, really solid. Brutal Truth fucking rip through ‘Sister Fuck’ as only they could, awesome to hear these lads again. Byzantine do a lovely version of ‘Shop Lift’ with some really nice guitar effects being used, giving it a unique feel. Minsk lay down a great spacey ‘Ruptured Heart Theory’ in their own unmistakable groove. Bloody Panda produce a super long rendition of ‘Anxiety Hangover’ using haunting keyboards to awesome effect. Left in Ruin knock out superb version of ‘South Discomfort’ with some harmonica thrown in for good measure. And finally The Unholy 3 finishes the CD off with a bizarre country take of ‘Torn Between Suicide and Breakfast’, great. Whether you’re an Eyehategod nut our not this CD is a must, the array of bands featured alone is staggering. Some of the finest underground talent around at the moment. 10 Years of abuse…, Here’s hoping for a lot more. Eyehategod we salute you.