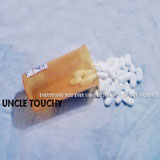 Uncle Touchy are dirty, dirty boys. Nasty, sleazy, slovenly blokes who reek of paint thinner and fags. They probably have racing forms sticking out of their back pockets, dubious criminal convictions and you must never EVER lend them money.

How do I know this?

Well, I listened to their album. It’s all there. Sure, most of it may be subtext, but, you can tell. These aren’t people you’d ask to dog-sit or leave alone with your sister. That would probably end up with an unwanted pregnancy, and your sister probably wouldn’t come out unscathed either.

Musically here we’re in the ballpark of the Am Rep/Noise Rock thing, with a touch of Pigfuck (anyone remember that term? Big Black, Killdozer et al? No? Pfft. Kids today). Looser than, say, The Jesus Lizard, but still retaining the lock-tight bass and drum bottom end of that band, Uncle Touchy are a snottier younger relative, reminiscent at times of sadly-defunct Bay Area band Dead And Gone’s punkier take on noiserock.

Vocalist Justin Lewis yelps, howls, croaks and screams his way through Everything You Ever Wanted To Know About Violence like a wine-drenched serial arsonist on day-release as the boys in the band – Mackey, Rock Hartigan and …uh… Capt. Zupac Dickhands III – grind out rumbling Unsane-esque rhythmic shapes and tortured guitar wrangling behind him.

‘Bodyhammer’ opens proceedings with a tumbling percussive assault, cheesewire guitar and premium screamage, setting out the bands collective stall for what is to come. Chugging menace and atmospherically spooked-out guitar lines also lend a hand throughout.

‘Tiretread On Burst Stomach’ is Stone Temple Pilots ‘Sex-type Thing’ in the tenth circle of hell and clearly a reference to Alan Moore’s Watchmen.*cough* Nerds! *cough*, whereas ‘Genki Genki Panic’ ups the punk rock ante, speeding along on a clanking bassline, firebreathing discordant guitars and some Biafra-esque yelping from Lewis.

‘Soft Skin’ switches between a lumbering early Melvins discordant stomp and Crampsy hardcore  which culminates in a supremely wonky guitar solo, a stew of sounds that also finds its way into ‘Forced Out’ but gains a darker edge and some severely fucked-up sounding slide guitar.

‘Shithawks At The Diner’ runs with bluesy swing bleeding into speedy hardcore punk rock and features a killer performance from Lewis, seesawing between a more coherent sneering vocal and full-on screams.

Now, things get a little odd on the closing trio of tracks – ‘Officer Sausage Fingers’ is a speedy rock ‘n’ roll punk number with genuine singing from Lewis that, on the whole, puts me in mind of an less gritty yet totally rabid Sixty-Watt Shaman, which is no bad thing, and ‘Dimebagged!’ and ‘The Sensual Yet Forbidden Pleasures Of The Ladyboys Of Thailand’ have a pronounced metallic edge with more than a hint of, dare I say it, funk to ’em, along with a wilful tendency toward hurling themselves all over the place. In fact they sound nothing like the rest of the album but DO, in fact, sound a hell of a lot like Dog Fashion Disco, if anyone remembers them? A metal take on Incubus or a less crazed Mr Bungle, anyone? Sheesh.

So yeah, Lewis even croons here, sounding not unlike a cross between DFD mainman Todd Smith and Glassjaw’s full-throated frontman Daryl Palumbo – a band who are actually referenced in the title and on the front cover of this very album, fact fans!

It strikes me as very odd to include these last three tracks on the album, particularly as the latter two were part of the repertoire of Lewis’ old band Milquelizard, appearing on their 2008 album Disgust-O-Rama.

For me, much as these latter tracks sound great and are well done, they do detract somewhat from the main body of the record, stylistically. But, hey, that’s just me and it’s a minor gripe. Aside from that you’ll find no complaints here.

If you like it nasty, dirty, crazed and discordant but still very much rawkin’, you’ll dig the hell out of Uncle Touchy and Everything You Ever Wanted To Know About Violence, just remember, don’t leave ’em in the house with an unlocked drinks cabinet or an unspayed bitch, and count your rings when you shake hands with ’em, ok?