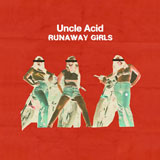 Call it shyness or a calculated decision to challenge fans and annoy critics and media, but Uncle Acid’s unwillingness (until recently) to emerge from its dreary Cambridge cloak has done just as much to intrigue and attract as its devotion to the dying cult ‘hippie-rock’ era of the late 60s/early 70s – splatter/exploitation, sex, mass murder – it’s one hell of an indulgent brew; and since the release of 2012’s Blood Lust, a lot of folks have been drinking the elixir – tracks like Death’s Door and Ritual Knife have become lovably sick classics while the more subtle (and more sinister) Beatles-inspired Mind Control (album) has slipped under the radar and firmly lodged into our brains (and hearts). And now, frontman Kevin “K.R.” Starrs and his team of Deadbeats step clearly into the limelight as the modern musical ‘wizards of gore’ with Runaway Girls, a two track EP that gives us just a touch more of what we’ve come to know, crave and kill for.

Spahn Ranch flashbacks, narcotized orgies, aerial views of mass suicide scenes, and coke snorting biker girls on the run (from redemption) – the promo video for the title track is a delectably twisted treat and Uncle Acid’s still fleshing out its reliable formula of catchy (almost poppy) grooves and mind bending Sabbath riffery. The song is a more aggressive statement on 60s groove – no lengthy intros, it just blows through the speakers at the point of ‘press play’ as an ascending/descending blues main riff carries the track and ‘owns’ the core of the song. Although streamlined in its simplicity, the song is effective in the sheer coolness of its execution. It’s vintage, it’s sadistic, it’s quintessential ‘Deadbeat’ material – but the devil is indeed in the details, and the beauty of this band and their sound lies more in the sobering melancholy and expansive feel of older tracks like Mt. Abraxas, Valley Of The Dolls or the awesome Devil’s Work – so for sure, the group makes a smart move backing this new EP with an acoustic version of the latter. A resonating sadness shone on the original (amped) cut but the new (acoustic) arrangement highlights this darkness even further – the band stays true to the original structure without jams or tangents but slows the tempo – menace, vulnerability, strength and staying power prevail and Uncle Acid commands them all with an unusual ability. Nothing is ever quite what it seems; beneath every accessible hook lies a more suggestive and explicit horror – and maybe what’s truly disturbing is seeing our own reflection in the metaphor.

This is a great little EP that showcases both sides of the band, paying homage to its more aggressive earlier material but tapping into the progressive open mindedness that made Mind Control such a ‘subliminally’ awesome outing. Where to from here? Who the fuck knows…but for Kevin Starrs, one thing is certain: no violent death will remain unseen…or unheard. 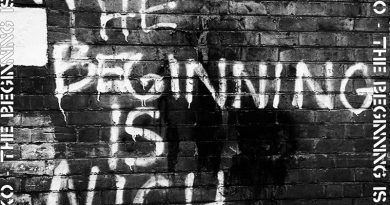 Review: Thicko ‘The Beginning Is Nigh’