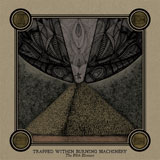 Buoyed by the sheer dirty depravity of debut The Putrid Stench Of Self Decay and the somewhat knuckled-headed but devilishly diesel-smoked fumes of Midnite Collective single Tire Fire, the concept of Trapped Within Burning Machinery returning with a second full-length concept album based entirely around the film The Fifth Element was more than enough to intrigue me. The Moreno Valley, California fivesome, spearheaded by lead guitarist/vocalist Zak Esparza, have already begun to make a name for themselves on the US underground with their slowed-down, yet thoroughly blackened take on funeral sludge, which often hints at some more subtle, underlying melodies. But this album is new territory for the group, stepping into a fully-fledged concept record based around the inherent cosmic darkness of the 1997 sci-fi epic, perhaps most famously remembered for Mila Jovovich flailing around wearing nothing but some white tape across her modesties.

As the triple-guitared juggernaut step out upon this epic voyage, one thing is for certain: this is a marathon of an album. Featuring six tracks and only two shy of the 11-minute mark, this is far from easy listening rock. Significant time and patience must be invested to appreciate the shifting battlefields weighted down by the likes of the bulldozing Diva Plavalaguna (played in the film by Maïwenn Le Besco) and Jean-Baptiste Emmanuel Zorg (aka Gary Oldman); two potent cuts of extreme metal so downtrodden that they’re virtually indistinguishable from the bottom of the muddy trenches they came from. The latter in particular is surely one of the highlights of TWBM’s young career to date – a fireball of twisted, tight riffing, bellowing throat rips from Zak and drumming solid enough to leave Thorr’s Hammer feeling like they’d missed a trick.

On the flipside, Mr Shadow and closer The Divine Light may pack some menacing riffery but they also showcase the band at their most vulnerable as the basslines become more fluid and the monstrous sense of doom slows finally to the crawl of a solemn wake. Korben Dallas (Bruce Willis’ taxi driver extraordinaire) tries its hand as the “accessible” upbeat track on The Filth Element as the bile spews sweetly from Zak’s lips and the melodies whiff of a more blatant Neurosis or Yob scent.  The same cannot be said for the giant opener Leeloo (Jovovich’s character), which jams on the same plodding course for nearly fifteen minutes with very little sense of direction. Perhaps that’s the way it’s meant to be but as an opening track it’s a bit of a snooze-fest to me.

I’m not sure how I feel about a strong film concept being baked into a funeral doom album with thoroughly indecipherable lyrics. Yes, the film is a cracker, full of atmosphere, uncertain futures, violence and prejudices, which is somewhat mirrored in the imposing sense of gravity embedded in Trapped Within Burning Machinery’s heaviness, and true, the song-titles are all themed around the characters themselves, but what really do you end up with on The Filth Element? Well, it’s still a blackened sludgy, spacey, doom album and a challenging listen at best, which hasn’t left me gasping for more come the eventual conclusion. TWBM are a bit of an enigma of a band, almost comfortable in trying to be a slice of everything right across the spectrum of both death and doom, but with a band with three guitars, there’s a severe lack of engagement and no hook to rope you into a big idea that’s quite clearly their “thing” and not anyone else’s.

Perhaps I’m doing them a disservice, perhaps I need to see them live in order to get ‘it’ or perhaps I’m just not in the mood, but for all the pummelling venom, tempo-shifting shamanic chants and ponderous percussion, I just didn’t quite enjoy The Filth Element as much as I’d hoped. Still… it’s given me a fantastically legit reason to stare at Ms Jovovich’s virtually unclad perfection all in the name of musical research and for that alone I’m willing to buy all of Trapped Within Burning Machinery an ice cold beer in thanks.