The weighty yet atmospheric majesty of SubRosa will forever be missed in the modern doom scene; a unique voice in a genre that can rely far too much on old tropes to get by. So, with the advent of The Otolith, featuring four former SubRosa members, we look toward for something new and life-giving in 2022. Their debut recording Folium Limina is out now through Blues Funeral Recordings.

As if to immediately set themselves apart, the band start with their longest effort, Sing No Coda, a piece of artistry on a level that I wasn’t ready for. From the humble tones at the start and building with a classical violin-led gloom into a churning riff that is straight from the SubRosa hymnbook. But there is a lot more swirling and flowing around The Otolith‘s sound than a mere continuation of their previous band’s work.

Hugely atmospheric, nods towards ambient and folk music lurk beneath massive doom riffs and ghostly vocals, and when the riffs drop away into a haunting, neofolk ballad, you’d be forgiven for imagining yourself at a campfire in rural Appalachia, 150 years ago. That juxtaposition with the huge riffs is difficult to explain, but it just works in a mournful and affecting way.

No band has used the violin this effectively apart from My Dying Bride; it is the perfect instrument to accompany such weeping riffs in Ekpyrotic, while the potent roar of Andromeda’s Wing gives some real Neurosis vibes to its raw power and the likes of Worm Ouroborus come to mind for its darker, softer moments. The vocal performances are absolutely stellar; Levi Hanna‘s mighty roar doesn’t appear too often, but when it does it is massive, while the others mingle in between each other with sombre croons, aching fragility and an almost ritualistic intonation.

It hits all notes; from rumbling and crashing doom to delicate folk balladry through pastoral shade and bright open space..

The solemn Hubris has one of the most majestic builds in music today; from a simple violin melody and hypnotic vocals into a heavier wall of riffs, but it never loses anything from its conception in the glorious ether. Don’t think all this means there is a lack of weight though, that riff that breaks down in Bone Dust at around the 5:45 mark is tectonic in its effects. It all comes to a grandiose, morose conclusion on the vast closer Dispirit where everything comes together shrouded in piano, violin, guitar and sadness. It’s not a funeral for SubRosa, but it definitely feels like the closing of a tear stained chapter in these wonderful musicians’ stories. What a tale it looks like it will become.

Folium Limina is an album full of beauty that is almost too difficult to describe. It hits all notes; from rumbling and crashing doom to delicate folk balladry through pastoral shade and bright open space. The vocals are ethereal in the TRUE sense of the word as if draped gently across the music but underpinned by rich tones and simmering strength. The interplay of violin and guitar could teach classic composers something about harmony, and it all comes together to create 2022s most enriching aural experience. Make a space on your album of the year lists, somewhere near the top, because The Otolith are coming for it. 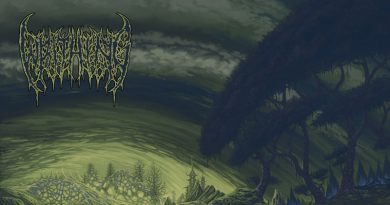