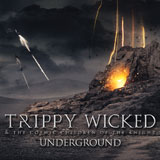 ‘Underground’ is certainly an apt enough title for the latest release from St. Albans’ blues-sludge kings Trippy Wicked. Despite spoiling us all already with two full lengths of both stunning inventiveness and expertly solidified groove, the band remain at the cusp of the UK subterranea; neither quite revered enough to step beyond the beer-spattered stages of the pub metal scene, nor niche enough to play said gigs without a widespread army of loyal supporters rocking up and singing every single lyric and riff back into their faces. This is a three-piece who live and breathe the underground air and upon listen after listen of their latest EP, you simply must wonder how long they’ll continue to remain under the rock radar. Frustrated at the very limitations of the music industry itself, drummer Chris West took matters into his own hands last year and kick-started his very own record label – thus securing the independence of not just Trippy Wicked, but a slowly developing roster of equally talented heavy UK acts. If that alone isn’t “underground” enough, then it’s hard to say what really is.

The eponymous opening track gets us off to an unusually speedy start, yet if anything it harks back to the vibe and atmosphere of the band’s 2009 album ‘Movin’ On’ rather than the more recent 2012 anthem-fest ‘Going Home’. Frontman Pete Holland once again resumes his quest to find the glorious middle-ground between Soundgarden’s murky melodies and Crowbar’s gut-wrenching riffage – on this evidence; he’s definitely getting closer to perfecting that formula. Initially a journey through the emotions via Holland’s guitar work, it’s the versatile yet beefy bass work of Dicky King that really drives the Trippy truck forwards with both an assured clarity and an eerie sense of uncertainty. As the track sways and sidewinds towards its close we’re treated to one of Holland’s short but effective solos and a sense that there’s a more mournful side to the band than just songs about beer and hillbillies.

A lot of bands pinch or borrow riffs these days, but rarely do these “acquisitions” arrive from their own back catalogue. Holland, West and King let no rehearsal room snippets go to waste however with a re-exploration of their ‘Echoes’ riff structure from ‘Movin’ On’ in the aptly titled ‘Echoes Return’. Immediately you’re hit by the weirdly triumphant sense of sorrow as Holland cries “I find it hard to believe in you today, I find it hard to be leaving you this way”. The riff itself is an absolute bulldozer and as Chris West pounds his drums like a Viking heading into battle, it’s hard to think of a moment when this band have been heavier than at this crushing crescendo. The only meddle I’d make here is that Holland’s voice is strong enough to stand alone with a single-tracked vocal recording rather than as a dual layer, although the latter format gives ‘Echoes Return’ a grander feel but perhaps without the full grit to its lyrics.

‘Enlightenment’ and ‘Discoveries’ give us some rare glimpses at the instrumental-only side of Trippy Wicked’s range. The former features a solemn tom-beat and a solid bassy undertow submerged beneath a sea of what sounds like Ebow-heightened guitar lines and yet wave upon wave of Holland’s ever jagged coastal lines of riffage. ‘Discoveries’, despite having an interesting composition not unfitting of a lighter version of Yob or even Isis, could still benefit from some vocals and without Holland’s smoothly tones, it loses a little Trippy-ness in the process. That said, it’s genuinely moving as a piece: striking a tone that few sludge-related acts would ever think to seek out.

Speaking of Isis, closer ‘New Beginnings’ hints at the journeys of the great Egyptians and their violent ways of pleasing the sun god Ra. A mid-paced number which seems to sit and contemplate more than it stands up and shouts; as Holland fades out with a wholesome promise that “We will live as one”, ‘New Beginnings’ feels more peacefully serene than it does destructive and powerful. Once again, the band seems eternally unrestricted in both their movements and ideas and whilst it’s hard to picture this track in a live setlist alongside the likes of ‘I Want Another Drink’, it’s refreshing to know that they’re capable of such varying sounds of the underground.

It’s difficult to finish up without mentioning the recent announcement that Chris West will no longer be drumming for Tippy Wicked. Quite what kind of new beginnings lie ahead for the band, it’s hard to say at this stage, but without one of their founding members behind the kit for the very first time, it’s certain to be a new beast that emerges from the hulking shadow that this terrific EP casts.