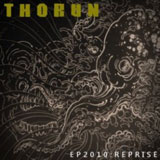 From the wilds of Wales come charging the mighty Thorun!!! This band seems to have appeared seemingly from nowhere to be picking up some serious plaudits for their first foray into recorded sound, and not without some justification it has to be said.

Straddling that murky grey area between stoner, sludge and doom, Thorun offer up 6 tracks of instrumental riff worship. It is unclear whether Thorun are an instrumental band by design or simply through the lack of available singers in their part of the world. Whatever the reasoning, Thorun are one of the rare bands that make this kind of thing work pretty well.

The charmingly titled, vegetarian baiting “Cow Smashed Into meat” kicks off with some tasty yet straight forward riffs. Sonically these guys aim for the detuned grunt of a prime sludge band but inject enough rock and roll strut into the tune to stop it turning into an oppressive mass. The other key to holding the attention is an ability to know when to change. Thorun don’t allow their riffs to outstay their welcome and swap between musical themes at the perfect times.

“Buried Under 15 Tonnes of Rubble” continues where the opening track left off but shows a greater nod towards the doom aspect of their sound coming over with undertones of The Obsessed (or any one of Wino’s other musical ventures barring St Vitus). That the opening track and this tune are around the 6 and 5 minute marks respectively yet don’t become monotonous with a central vocal hook is a testament to these guy’s compositional skill. Maybe they all suffer from ADHD so need to keep things interesting and moving for their own sakes!!!

Moving past the minute of ambient siren noise that is “Ghost Siren” we come to “We Have Reached Critical Mass” which kicks off with some mellow yet melancholic clean guitar work that evokes prime Alice In Chains and shows that Thorun have more strings to their bow than massive riffs. That said it isn’t too long before we are beaten down by a mighty Sabbathian cymbal punishing stomper of a tune. The music here is more than capable of invoking the spirit of impending dread and catastrophe that the title suggests without any need for lyrics…no mean feat!!!

The ghost of Sabbath Past is never too far away and “Here Come The Robots” grooves with a “Sweet Leaf” approved stoner lurch and a keen sense of dynamics that builds and drops throughout the tune…a nice sense of tension and release.

One of the great things about instrumental bands is the freedom they have to run with creative titles and this EP ends on a classic. “Look Mom! I Made A Death Machine” closes this chapter in Thorun’s development with some more hulking Sabbath styled groove ‘n’ crunch before going all heads down and boogie on our lily white asses!!!

It’s perhaps inevitable that comparisons will be made with bands such as Karma To Burn but they wouldn’t have a great deal of foundation. Would Thorun benefit from a vocalist? Maybe, but what kind? An all out growler may not do justice to the level of depth and melody the band already possesses whereas a full throttle metal warbler would simply be a distraction as opposed to am improvement. For now they seem to be doing just fine without one and these 6 songs, unlike a lot of similarly instrumental bands work in their own right and at no point become a chore. This is an impressive start to what should prove to be a long and pummelling career!!! 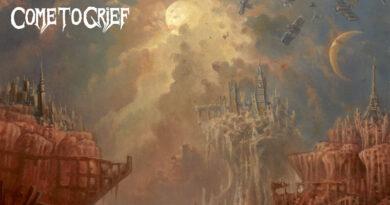 Review: Come To Grief ‘When The World Dies’