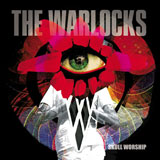 But The Warlocks, to a very select community, are legends in the strictest sense – their narcotic navel-gazing tunes drawing comparisons to bands I don’t need to disinter here. They are legends in that many bands would not exist without the blend of psychedelia they peddled on genre-definers ‘Rise And Fall’ & ‘Phoenix’, the tightly wound ‘Surgery’ and the fuzzy bluster of ‘Heavy Devy Skull Lover’. Their most recent record, ‘The Mirror Explodes’, planted them four or five steps ahead of their musical descendants. At least. And all with one consistent member – Bobby Hecksher.

But the chain of musical influence really stems from The Brian Jonestown Massacre (another band led by one cosmic guru, Anton Newcombe) – and it’s them that I’ve always measured The Warlocks against. Anton and his band of merry committables practically invented Modern Psychedelia, and bands like Black Angels, Toy, The Horrors and thousands of others pay a certain amount of deference to those American Kraut sounds synthesised for complete euphoria. Even heavier acts like Wooden Shjips, White Manna, Dead Skeletons and White Hills take influence from Brian Jonestown Massacre. So to say that the closest comparison point I have for The Warlocks is The Massacre is a big deal.

‘Skull Worship’ is a drowsy record, filled with droning motorik beats and hazy effect-laden guitar. It rarely ambles above a zombie-shuffle-pace. But it’s filled, as always, with various textures, colours and moods. Opener ‘Dead Generation’ opens with an Elevators-on-downers chord slash that grows outwards into a droning accompaniment to a locked-in motorik rhythm section, never changing, even when Hecksher’s mumbled, mixed-low vocals hum into life. Buzzing shoegazer guitar leads spice the tune up, adding an extra layer of warm fuzz, and a piercing organ sound completes the deal. It’s not a live-wire blaster like ‘Shake The Dope Out’, but a taster for the sedate moods to come.

Restraint is the key to the frazzled second tune ‘Chameleon’, a burnt out droner with more than a passing resemblance to Black Rebel Motorcycle Club’s recent forays into post-trip blues. It’s also got a downbeat, pulsing rhythm that rises and falls with the bass notes, which is a completely hypnotic effect.

The bass is the chauffeur on ‘Endless Drops’ (… of acid?) It pumps and throbs, thick as incense smoke. Another desert-dry drum figure lurches along with the bass, while a post-Shields toe-peeping guitar soup spills out of the speakers. ‘Endless Drops’ would fit quite nicely on BJM’s MBV tribute record ‘My Bloody Underground,’ itself a loose, groggy din of a record that is as likely to make you nod off as be seasick from the woozy tones within.

A Bonzo-esque bass drum thud kickstarts ‘Silver & Plastic,’ & lazily strummed guitars & a low-key bass line flesh out the sound. Spindly guitar leads and strings take it in turns to fill your mind before a GUITAR SOLO takes you on a tour of the Cosmos. It’s a succinct but sufficiently baggy solo, much like the song itself.

If you’ve still fought off the inevitable bliss-nap that follows that track, prepare for launch to an even more peaceful universe. ‘He Looks Good In Space’ is a heavy-lidded lullaby that cradles you in a Pink Floyd-sized hug of psychedelic beauty. I guarantee you will feel the urge to succumb to the sleep fairies…

Not wishing to spoil the mood, The Warlocks bring back the cannabinoid-motorik for ‘You’ve Changed,’ and it never reaches above a heartbeat’s pace. Psychedelic-keyboard-tinnitus tickles your fancy, while the guitar crunches and crackles along with the stoned rhythm. It’s tricks like this that make or break peoples’ opinions about psychedelia – there are many, many bands out there making tunes like this. But it’s the purity and authenticity of The Warlocks songs that prove the deciding factor. You often forget that they aren’t contemporaries of Pink Floyd, such is the classic approach they take. But at times they’re remarkably similar to Radiohead’s most narcotic episodes.

‘It’s A Hard Fall’ is another bitter comedown anthem for canonization. It’s crawling pace and soaring guitar leads make it the best song on the record, completely emphasising the strung-out, washed-out vibe The Warlocks are peddling here. It’s a stripped back, pared-down distillation of The Warlocks sound that will appeal to their homeboys. Feel me?

‘Eyes Jam’ sounds like a back-masked version of some of the sounds of the record. It’s a bit of a loose way to end a record like this, but it’s unlikely many of the stoned space cadets out there will get this far when they listen to the record. And if they do, they’ll enjoy this little curio.

Basically, it’s a The Warlocks record. A raw, rhythmic and primarily low-key album that merits further listens and does nothing but cement their legacy. It’s a frail, no-frills record high on killer, light on filler and it could be (the obligatory pointless comparison as a cheap indication of quality) their best album since ‘Phoenix.’ It’s certainly better than the load of old bollox I keep seeing labelled ‘psychedelic’ by the ‘music press.’ DIG IT! WIG OUT!

Recommended if you like:
Brian Jonestown Massacre – ‘My Bloody Underground’
Black Rebel Motorcycle Club – ‘Specter at the Feast’
Verve – ‘A Storm in Heaven’