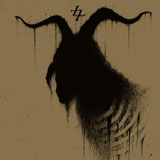 It would be a tough task to review Southern Lord’s latest sonic slab of filth without using the word ‘blackened’ at some stage. So please excuse me if it slips in a few times here and there!

The Secret are the latest metallic needle to be pulled from Greg Anderson and Co.’s latest delve into the haystack of heaviness, and, in fairness, on first listen appear to be blazing a similar trail to that taken by fellow proto-black-metal revivalists, such as Wolves In The Throne Room and Nachtmystium. A few more listens however reveal a second realm of interesting subtleties (and not so subtleties!) within the dynamic of these Italian grinders.

‘Solve et Coagula’ (“to loosen and to thicken”), the band’s third and most monstrous effort to date, is rather peculiar in its arrangement; the gathering, dismal five-minute drone of ‘Cross Builder’ climaxes into the blast-beating, gut-wrenching, barraging, midrift of the record. Short, sharp 90-second bursts of Rebel-Extravaganza-era Satyricon bombast ensue as the four-piece clatter through the graveyard genre of thrash, grind, death and black metal before slamming on the brakes for album cornerstone ‘Bell of Urgencuy’. It’s in these frenetic collisions in the speed of riff pummelling which separate any metal band from the black-pack, and The Secret demonstrate the ability in this somewhat short record to be both unrelenting and thoughtfully hesitant in their performance. In flirting with these different styles, the music is more accessible to the non-corpse-painted, and as well as the aforementioned new era of blackened grind metal, The Secret could also be compared to bands as disparate as death-thrash legends Obituary, doom-sludgers Eyehategod and France’s environmentalist monoliths Gojira.

Technically, this is blunt-nosed ferocity at its finest – frantic-paced powerhouse drumming, circling, scything post-Gothenburg-underground guitars and an other-worldly bellowing howl like a werewolf hungry for blood. Yet along with this powerful musicianship comes the responsibility and need for a certain amount of originality which I fear the Trieste swamp-dwellers perhaps just fall short of. But a talented grasp of varying metal styles, together with a colossal amount of fierce metallic power, the willingness to work hard and taking a chance by sending off a wild dream of a demo tape to a major label will could perhaps catapult them to the next level on their mission to incinerate ear-drums across the planet.