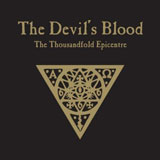 It seems to me there is an increasing number of bands grabbing themselves a female singer, throwing some loose witchy occult imagery over themselves and trotting out some fairly mundane doom metal (with a few notable exceptions like the awesome Alunah!!!). And so it was, never having heard The Devil’s Blood before I approached this album with some trepidation, my interest having been piqued by the repeated references to 70’s rock trappings in their sound. Any mention of 70’s rock and I’m on it like a fly to shit. When I hit play on this, The Devil’s Blood’s second full length album, my fears pretty much disintegrated.

Ignoring the opening track “Unending Singularity” which is two minutes of ambient build up, the first track proper, “On The Wings Of Gloria” comes as a total surprise to the uninitiated. Upbeat and driving this also manages to be ethereal and atmospheric. The Devil’s Blood seem uninterested in trying to out-heavy the competition, instead preferring to present a clean and focussed hard rock sound that draws as much from 70’s soundtrack music as it does from metal.

Ostensibly built around a brother and sister pairing of Selim and Farida Lemouchi respectively, this Dutch band weave rich tapestries of sound. Selim’s guitar work is peppered with clean tones and acoustic passages while Farida has an impressive voice that is at once folky as it is imbued with a certain rock power. The overall effect is highly layered with strong vocal harmonies throughout and the guitar work is orchestrated to an almost Zeppelinesque level that gives each song a grandiose and cinematic feel. Imagine if “Rumours” era Fleetwood Mac had been brought up listening to Sabbath and reading Dennis Wheatley novels and you might be halfway to understanding the sound these guys produce. The closest modern comparison would probably be a band like Ghost whose Satanic vision is backed up by a sinister yet mellow metal sound.

It is hard to pick out a stand out track here as all the songs are of a consistent quality and revolve around a sound that is dense yet not lacking in clarity. Each track never seems to stray too far from a central sound, although “Cruel Lover” would be a fine contender for a single if there could be such a thing on an album such as this. “She” is a driving yet emotional gothic drama built around multiple guitar and vocal harmony sections that seems to stand as a centrepiece of the album. Where most of The Devil’s Blood’s contemporaries may be more focussed on playing as slow as possible or creating tones designed to crush with heaviness, this album seeks to discover and play out every melodic nuance possible.

This is a surprisingly rich album full of huge depth and melody that belies yet enhances its Satanic content…perhaps evil it better presented through the beautiful than the ugly…Glenn Benton, take note. The Devil’s Blood are a classic case of not judging the book by the cover as this could potentially have a far greater appeal beyond the boundaries of metal. With an album of such density and complexity I would be interested to see how they could possibly hope to pull this off live without four guitarists and a couple of keyboard players…not to mention half a choir to replicate those vocal harmonies. That said though, this album stands on its own two feet as a fantastic artistic statement and time may prove its worth…oh and take a tip, listen on headphones where the full majesty and scope of the production is revealed!!! 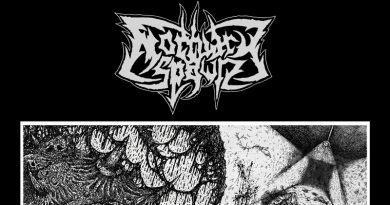