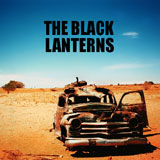 Cementing their first year in existence with the release of a self titled, self produced mini CD, The Black Lanterns are here to remind you why underground music is a joy to behold; funnier than your favourite band, more irreverent than Old Nick peeing in a font and bursting with ideas, this outfit hailing form the North Of England have picked up from the wreckage of their former bands (Seal Team Six, Human Wreckage, Largactil, Falconetti) and decided to put out music they want to play and damn the consequences.

Many up and coming bands talk about a punk rock ethos, but few deliver on the commitment; taking a look at the grainy photocopied black and white sleeve (Mine doesn’t even fit in the case properly as it has been cut too small!) and the hand written details on the CDR, then whole thing drips of DIY in all it’s charm, it’s lack of pretension and it’s general ‘Fuck You’ attitude.

Sure enough, when the album starts there is no need to concentrate on any fancy packaging (or lack there of) because the music does the talking and backs up their punk rock ideals to set them out as being the real deal and not some posers who got up and spent hours in the mirror making themselves look like a parody of the scene.

‘Victims Have It Easy’ builds tension out of the block with its lurching groove, before unleashing a primal hardcore blast that gives way to a breakdown laden with heavy bass fuzz. The production is as raw as the packaging and the music but this again merely serves to add to its charms. This is a band designed to get in your faces in small dingy clubs, to sneer at bands with well choreographed stage moves, to have a pint with you before, after or during the show or throw it over you if you don’t like it.

By no means one trick ponies here, The Black Lanterns keep you guessing as ‘Good Cop, Bad Cop’ starts out frenetic and bug eyed, screaming in your face but manage to weld this to an almost stoner rock swagger that is drenched in Lo-Fi cool with it’s bellowed, hook laden chorus.

Similarly ‘Basement Tenant’ is a break neck blast of old school punk and hardcore, but ‘Red Carpe’t actually has a potentially huge chart bothering tune buried deep within the fuzz and it is this deliberately raw sound that keeps them from straying into plastic punk band territory. Make no mistake, your Mum might call it noise but The Black Lanterns know how to write a tune, they just make you want to work for it and this doesn’t stop with stringing three chords together.

‘No For An Answer’ displays some cutting self depreciating lyrics as vocalist Scott Donny Rogers howls ‘There is a gapping hole where my life should be’. There are so many gems on this album that on first listen might be lost in the distortion but this is an album that should not be dismissed on the debut spin.

Musically the band walks a tightrope of punk, metal, blues and hardcore – never straying too far down any one particular path at any given time and I think they get the balance just right and flavour it all with an industrial edge that shows they have many influences.

Considering the band are a year old this month it has obviously been a creatively rewarding period and this mini album has been one of the highlights to hit my doormat this year due to the sheer amount of joy it caused me – from the rubbish (but cool) hand made sleeve, from the authentic production and most importantly from the sheer potential on display.

Go buy it, I mean it’s a fiver for Christ sake…