The fourth album by Italy’s She Spread Sorrow (Alice Kundalini) is ‘the story of a huntress and her morbid and psychotic relationship with her prey.’ While there are six tracks totalling forty minutes, they flow together and play out more like a unified suite. The press release states it was ‘was born after 3 years of intense recordings (and) pursues the need to whisper secret, forbidden tales and to stimulate the deepest shadows of the human being, exploring the boundaries between the delicate and the violent.’

The listening experience is quite rewarding for one who finds this description intriguing. The overall effect is that rare artistic achievement where brutality and beauty become intertwined into a hypnotic landscape of deep emotions. Kundalini’s unique sound is both industrial and dark ambient, with brushes of death metal, noise rock and large psychedelic spaces like the earliest Pink Floyd.

The opening track, Blue (also the protagonist’s name), starts with tribal drums and a slow burn drone reminiscent of space rock, at times even krautrock. The vocals, which remain the same for most of the tracks, are hushed whispers, often distorted, and so low in the mix that the lyrics are barely discernible. The second track, Get Me is much the same.

Next, Stand is more old school industrial – it’s synthesizers and drum machine in the NIN vein, but the vocals continue in their same unique fashion. Dragonflies begins with the droniest keyboards yet, and death growls are added to the vocals. These haunting five minutes brings the album closest to music that would fit a horror film soundtrack, unsettling, while at times simultaneously lush and soothing.

Unsettling, while at times simultaneously lush and soothing…

Inside exists on two unique layers – the same minimal repetition and a rhythmic Floydian dreamscape, and as divergent as these seem, they work off each other excellently. Both build slowly and eerily to a crescendo and the vocals re-enter with the now familiar sinister whispering, as well as noise-rock screams, similar to those used by bands like The Body.

The final track Parasomnias is also by far the longest at 10:33. All of the tropes used thus far are repeated with subtle shifts in tempo and dynamics, there is just more of everything at once as the album rises to an emotional and eerie climax.

This was my first experience with She Spread Sorrow, so I cannot say how it compares to other works and I definitely recommend Huntress to any reader who appreciates the musical styles I have explained. 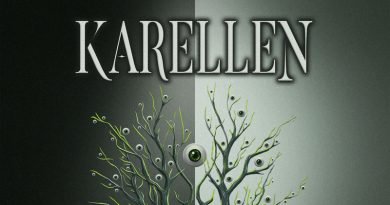