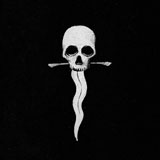 To be honest, when I first heard the name Sweat Lodge, my initial reaction was: “Ewwww, really?!” I mean yeah, sure, granted, I do frequently choose to spend my evenings hanging out in bars characterised by their sticky floors, the loud, live scuzzy music and a predominantly male set of attendees shakin’ their thangs… and by “thangs”, I mean “beards”. But really? A lodge of sweat? Like, a big, fat house full of perspiring men is what you chose to call your band of bruvvas from various muvvas? Mate, that just sounds to me like all of the whiff and none of the riff.

But then I quickly realised that any album that opens up with a song as gloriously-titled as Tramplifier is surely worth at least half an ounce of my time and the remainder of my beer before I navigate away to a different Bandcamp extension (other music streaming services are available…) But what I actually found with Tramplifier and indeed with the rest of Talismana, was that, to cut a long story short, several beers later, I still hadn’t moved tabs once.

2015 is turning into quite a year for ridiculously good riff-heavy albums and alongside releases from almost all of the established big-hitters, the quality of a good chunk of the debutants is sky high. And so if you’re remotely of the Fu Manchu-able, Sasquatch-ian, Mos Generat-ed or Kadavar-d persuasion you’ll be wanting to get your ears around this bad boy from yet another lil’ old band from Texas.

Sweat Lodge have a humble, unassuming sound as many “new” bands (Sweat Lodge formed in 2010) can understandably boast, but their punchy, psyche-laden individual monsters of groove are so assured, so well calculated, so warming and so damn funky, that they could comfortably hold their own on any classic rock playlist. The twin guitar harmonies of Javier Gardea and Dustin Anderson interweave and soar beautifully on the likes of the simply fun-loving Boogie Bride, whilst cackling and rattling away like ZZ Top on a cattle-grid on the crunchy proto metal of Heavy Head and the pool club drawwwl of Bed Of Ashes. The latter of which already carries a cracking video of the band playing live in, errrmm, a pool club.

Austin “The Shock” Shockley and Caleb Dawson are an uncomplicated, yet neat, fluent and challenging rhythm section as is proven on the cosmic Slow Burn and the vintage romp of Black Horizon. Dawson, in particular, as a founder member of the band and a clear focal point, sounds comfortable and commanding behind those well-thumped tubs, driving the guitar-players to bounce off each other and race into some often unexpected, but always welcomed tempo changes.

However, the ace in Sweat Lodge’s pack is undoubtedly singer Cody Lee Johnston. The guy looks and moves on stage, based on YouTube evidence at least, (other video streaming sites are available…) like a far younger, far fitter John Garcia, whilst his voice is as smooth but powerfully throaty as a mash-up between Miles Kennedy and Paul Rodgers. Yep, that’s right, I went there – this dude has got some fucking serious pipes. Just take one listen to that bouncing bundle of the aforementioned joy Boogie Bride, the silky defiant flow of Tramplifier, the rocking rabbit hole of Banshee Call or the raw, chesty power of Phoenix Ascent and if you still don’t believe me, I’ll take you down to that steamy, manly ranch myself for further interrogation. Cody is the perfect foil for those (tr)amp-busting riffs and Dawson’s pronounced thunder drums, whilst he manages to never over-egg it and let his ego ruin the songs as so many vocalists have succumbed to over the years…*Cough! Coverdale! Cough!* (Other self-centred, mop-haired frontman are available…)

And so with Cody as their undisputed talisman of Talismana, there’s no doubt for me that Sweat Lodge are one bunch of sweaty, half-naked Texans that you should endeavour to (ahem…) lodge in your ears at the next opportunity possible. If they’re even half as good live as this record suggests, never mind the lodges – our gigs, all-dayers and festivals are all about to get a whole lot sweatier.