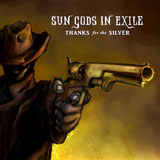 Well good God y’all!!! When the Sun Gods’ debut, “Black Light, White Lines” landed in 2009 it was a fine, smokey blast of southern fried hard and heavy rock and roll that was busting at the seams with tasty tunes and a raw edge that showed a shit ton of promise. Three years on and these boys have aged like a fine oak casked bourbon to deliver album number two.

The first thing you notice on spinning this release is a distinct “southerning” up of the bands core sound. For a band that live within spitting distance of Canada, Sun Gods nail that dusty good time rock and roll vibe that blends AC/DC with The Black Crowes and routes it via some tasty Blackfoot and Molly Hatchet inspired whisky drinkin’ hard rock. “Hammer Down” opens the whole shebang with some fine DCish riff action and Adam Hitchcock’s much improved 40 a day soulful growl very much to the fore. “Moonshine”, featuring organ and harmonica from new boy Chris Neal is a sexy 70’s bar room romp that could have been lifted from any prime Burt Reynolds movie!!!

Overall there has been a slight softening of the band’s sound. The guitars are less reliant on stinging fuzz and are allowed to ring out to much greater effect. Neal’s subtle but deft touches of organ, piano and harmonica never colour the band’s core sound too heavily but add that extra dimension to lift the songs into southern rocking heaven. The guitar pairing of Hitchcock and Tony D’Agostino that were all over the first album like crabs in a cathouse are still very much in evidence making this a guitar lover’s jizz fest as the duo trade lines like Yngwie Malmsteen never existed!!!

“Writing’s On The Wall” breaks out some tasty Faces meets Black Crowes style grooves before the Black Crowes influence becomes more evident on the more restrained southern cruncher “Climb Down” that pushes the organ further forward (ooer!!!). Whereas the first album may have occasionally flirted with metal on occasion, “Thanks For The Silver” has firmly kicked this into touch in favour of big rolling, dusty grooves and a generally more wistful vibe.

The boys bust out the rock again on  “Since I’ve Been Home” which kicks off like an unholy amalgam of Foghat meets Chuck Berry before a fat assed Black Crowes style one-two guitar riff heralds the verse before heading into one of the album’s most memorable vocal refrains. You may have noticed the Black Crowes have had more than a couple of mentions so far. That’s because that band’s first two records, before the psychedelics took hold, really laid the foundations for an album such as this to be made in making the transition from the Allman’s first forays into southern rock, through The Faces boozy crunch via Humble Pie to modern hard rock…and that is exactly where this album is pitching.

“Broken Bones” is reprised from Ripple Music’s “Heavy Ripples” double split 7” set also featuring Stone Axe, Mighty High and Grifter. In this incarnation though the song has greater drive and urgency and sounds more confident and rocking than the earlier version…though that is no excuse not to go and buy the original to make the comparison yourselves! “Smoke And Fire” is a darker little number that increases the groove and harks back to the 70’s hard rocking sounds of Ted Nugent’s “Stranglehold” and some of Kiss’ heavier moments and gives drummer Johnny Kennedy a chance to break out the cowbell.

The Sun Gods finally break out a 12 bar boogie on “Nobody Knows” which burns with a hard edged Skynyrd fire and features one of the album’s stand out choruses and allows Hitchcock and D’Agostino to bust out their Rossington/Collins inspired chops. Newcomer Neal also chips in some tasty bar room piano action to complete the picture.

No southern inspired album should be without the heartfelt ballad and in the title track “Thanks For The Silver” plays one of its ace cards as organ and piano back up Hitchcock’s finest and most heartfelt performance on the album. In true style the song gradually builds through its 7 plus minutes to include some “Freebird” style slide and Neal’s most significant contributions so far as the guitar is pushed to the back ground for a good portion of the song’s length. There is a new found level of maturity in this one song that one suspects the band could never have hoped to achieve on their debut.

The album rounds off with the charmingly titled “I Buried My Bitch’s Car” which once again steps into Black Crowes territory with an easy groove and guitars front and centre. Overall the production on this album, once again courtesy of Mr. Benny Grotto, is a vast improvement over the debut. Whereas that album bristled with a naïve charm but sounded slightly rushed, this time round  the sound has been tailored perfectly to fit the rough hewn vintage sounds the band is creating. It also has to be said the debut was the sound of a band in its relative infancy but this is now a band a full four years into their lifecycle that has toured and rocked together and grown as a unit.

I have a horrible feeling this album may find itself derided for its reliance on old school southern charm and for not being stoner or doom or even metal but that would be to do a very fine piece of work a horrible disservice. Sun Gods In Exile are most definitely not pandering to any trends and have created an album brimming with heart and soul. Sure, they may not geographically be a southern rock band but in their guts they’re drinking from the same bottle as the Allman Brothers, Skynyrd, Molly Hatchet and, yes, The Black Crowes. Sun Gods In Exile may well prove to be the undiscovered jewel in Small Stone’s crown. 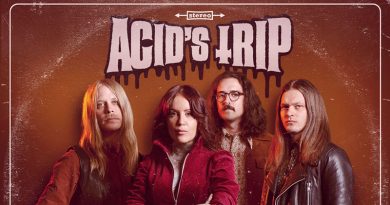