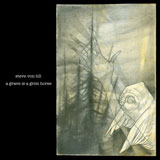 First we had Scott Kelly and now Steve Von Till, I’m guessing there was a break in the Neurosis schedule last winter, as here we have a another solo album by a member of the infamous Neurot tribe. This time singer/vocalist Steve Von Till’s third solo venture and released at the same time as Scott Kelly’s record. Now I did consider reviewing both albums together, but after much consideration decided against it. These are after all solo albums and represent the individuals personal creative thought, it is however interesting comparing both against each other considering their long-standing partnership in Neurosis.

On first listen it is very apparent that this album has a deeper sonic texture, a lush, layered production. Whereas Kelly stripped his songs down to the bare minimum of voice, acoustic and occasional bass, Von Till uses electric slide guitar, acoustic, cello, piano and even vibraphone. It is a comforting album and unlike the raw solitude of Kelly, Von Till has concentrated on the songs flow, the construction of the piece and its markedly more accomplished in this respect then both the Kelly album and Von Till’s previous two albums ‘As the Crow Flies’ and ‘If I Should Fall to the Field’.

Songs such as ‘Looking for Dry Land’ and ‘Western Son’ displaying a country twang within their down-tempo plod, like Hank Williams turned Doom. Also present through-out the album is a strong sense of dark Americana similar to that of Tom Waites.

This is another great record from the Neurosis camp, and although it may lack the same bare emotional wrench of Scott Kelly’s record, it does display a variation within the song writing far outweighing it’s shortcomings of which there are few. Another essential listen for the Neurosis fan and one that can’t stop me wondering what an acoustic Neurosis album would sound like…