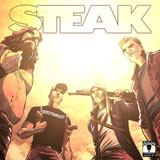 If you think carefully about the giants of the stoner/desert rock scene – Kyuss, Fu Manchu, Nebula, Karma to Burn, Acrimony – concept records were pretty few and far between. Sure, there was ‘Dopesmoker’, the hour-long ode to Sleep’s mountain of weed and Cathedral had concepts running throughout their mystical songs on several records, but none were full-on fantasy tales, with a narrative, cool illustrations, characters and theatrical drama. London’s Steak, or should I say the gun-slinging, alien-battling, human-race-saving Steak of southern Arizona, have decided to go there on their debut EP which has presumably been released via secretive pirate music channels to a world devastated by war and destruction. Set to the backdrop of a hostile takeover of planet Earth by the evil Lord Lazarus and his band of Doom Riders, Steak act as a last outpost for mankind, slowly building a resistance band of rebels to fight back and claim what is rightfully theirs.

And so, before you can say “John Connor”, we’re thrust headfirst into the chronicles of Steak with ‘The Butcher’ – a fast-paced, boogie-filled rifforama detailing the tyranny of the aforementioned Lord Lazarus. Lead singer Kippa, portrayed in cartoon form wielding his trusty magic 8-ball along with the rest of the band on some striking cover art by Eduardo Ferigato, is on top form, adding sickly sweet, yet throaty, John Garcia-esque vox lines over lone axe-master Reece’s speedy intergalactic riffage. ‘Machine’ relates to the torment of everyday life in Cyclone City under the 1984-tinted regime of the mutant race. Bassist Cam comes into his own, laying down the stoner grooves for larger-than-life drummer, err… Large, to channel Reece’s delicate and distant heavy blues forwards into a new beginning for mankind. Kippa rides “in the eye of the sandstorm” demanding that the children of the new revolution “try to save yourselves, and make a stand”.

I’m not really sure where Goat Whore’s tale of half-lost-love fits into this sci-fi yarn. Either, a bit of giggedy giggedy is desperately hard to come by in Cyclone City, or else we’re taking a weird side step into some kind of futuristic domestic row, but whatever the lyrics mean, the song is a mid-tempo romp through Fu Manchu-ist dive bars and Acrimonious brothels. ‘Fall of Lazarus’ is a hard-nosed biker anthem where the mighty Steak finally get their chance to overthrow the Lord of the Doom Riders, Lazarus himself. On this slower, brooding number, Reece slowly builds up an arsenal of overdrive-fuelled riffage as Kippa vocally summons up an army to “stick that animal back in his cage”. ‘Peyote’ is the calm after the storm, a dusty, cactus-field of an instrumental right out of the ‘Capsized’ or ‘Catamaran’ textbooks to finish off the opening episode in the Steak chronicles.

Musically, this isn’t the most starkly original band you will encounter throughout the galaxy. ‘Machine’ could stylistically feature on any of Truckfighters three past records and if you meddle with variable quantities of Fu Manchu, Orange Goblin and Wretch-era Kyuss, I’ve no doubt you could crack Steak’s secret recipe for rock. However, there’s drive, passion, swagger and balls in abundance here from a band who have steadily built up a solid fanbase in London since a much-needed name-change from The Ebbs(UK) in 2011. What’s more, it’s a free download, so don your visors, tighten your dust-boots, prime your blasters and come with Steak if you want to live.