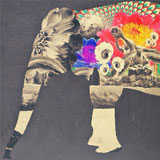 It starts with a singular idea and a willingness to forge ahead against all traditional odds. 2 years and 4000 miles later, Norwegian guitarist Filip Peterson and Mumbai based singer-songwriter Kushal Bhadra deliver what is arguably one of the best straight up 70s doom/proto-metal revivalist albums of 2014. Spiral Shades’s Hypnosis Sessions is the Peterson/Bhadra brainchild conceived from a shared love of 70s occult rock aesthetics and the mindset to play from the heart and not the head. But that’s not to suggest that “heady” doesn’t describe the duo’s take on heavy psychedelia, just check out the 12+ minute centerpiece to this 9-track opus Grim Rituals which deftly displays a plethora of labyrinthine slow groove hooks and extended harmonic minor solo jams; but despite a certain degree of required calculation and studio wizardry to bring this album to fruition, Spiral Shades maintains a collective philosophy centered on musical artistic integrity and an authentic sound that harkens back to the days when bands like Cream, Deep Purple, and Black Sabbath were more than just subjects of name dropping aspirers of classical cool.

The Peterson/Bhadra back story is rather unique actually; both have been disciples of all things 70s, heavy, and obscure, relying on internet clips and word of mouth to discover new and old school musical influences and to post and share their respective talents. A similar interest in and reverence for musicians like Wino and John Gallow (among others) laid the foundation for a lasting friendship and “intuitive chemistry” that’s apparent throughout the album. “Intuitive” because Hypnosis Sessions is a completely virtual record; all mixing and recording was done remotely with pre-programmed drumming. Separated by thousands of miles, the duo relied on a similar artistic vision and instinctive understanding of each other’s individual playing and writing styles to make this project a success.

Opener Frustration seals the deal early on reeling you in with sultry blues grooves and bowed out, stoned out leads. Peterson’s fingers twist, tweak and break into freak out shimmies like a hopped up lie detector needle revealing late night details you wish your better half never knew. Instrument clarity is pristine, with a mellow guitar buzz that’s sweet and subtly addictive. Tracks like Illuminati showcase this tone in full, unadulterated glory, relying on extended singular chords, tritone accents and well-timed progressions to assault the listener. The programmed percussion pounds with the kind of steady battery that made Chris Hakius-era Om so head noddingly wonderful. Bhadra heads up crooning detail, and given English is not his primary language, his articulation is on point; he delivers with a flare and swagger falling somewhere between Ozzy and a less freaked out, more melodic Lee Dorrian (we all love you, man). He even brings a little Pepper Keenan (vocal) inflection on the mid tempo hard rocker Fear; this song in particular has a blues break at the 3:30 mark that’s a good example of the album’s surprise twists and turns. Wizardry pushes that notion to the next level, commanding a spiraling riff and groove that kicks into steady state afterburn about 2 minutes in; some of the spacey forays from the classic Ultra-Magnetic Glowing Sound (Red Giant) come to mind, although Peterson and Bhadra manage to contain and focus the journey.

The duo strips away some of the studio layering on The Slowing Deep with a sparsely arranged construction; moody and frankly ominous, the song is an album highlight that steadily builds momentum before breaking into a nice thrash riff attack in the final minute. But Abstract Illusions is the superior cut, its heaviness like a gravitational field way out of proportion to what any living, breathing human is used to. Aside from boasting some of the record’s best songwriting, the awesome dual guitar lead harmonics elevate and transform the track, imparting depth, resonance and that elusive ‘emotional hook’ that’s the calling card of great songs.

Ironically, Peterson and Bhadra had to look to the future to discover and eventually pay homage to their musical past but Hypnosis Sessions is the poster child of how modern technology can go right. Two minds, one badass vision. I can’t wait to see what’s next. Highly Recommended.