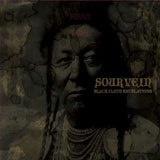 Sourvein will be a name familiar to most having belched out a number of releases in their 10 plus years of existence, including a split 7″ with Church of Misery on Calculon . This is some nasty shit right here. Any pretence at technique is thrown right out the window as the band lay down a shit-shakingly heavy two chord groove of such density that the room seems to go dark when you’re listening to it. Vocalist T-Roy must have the toughest vocal chords in the business as he pours forth a succession of bile drenched screams from the pit of his blackened soul…or so it seems. This really is music to make lame-assed Dream Theater fans shit their chinos and the detuned grind that plays the track out will have prog fans throwing themselves in front of buses. This is the musical equivalent of bathing in a tub of whiskey, weed, heroin, tar and razorblades and I, for one am ready to get nekkid and jump right in!!!

Blood Island Raiders are an entirely different kettle of metal. These guys have been doggedly ploughing their own furrow with numerous gigs an album of their own various demos and EPs and split releases with defunct London Sludge bastards Among The Missing. A far cry from the harrowing sludge of the flip side, this is almost jolly…in a brutally heavy trad NWOBHN meets doom kind of way. Reverend Al on guitar knows the power of the riff and lays down a thunderous crunch that’s chunkier than a fat kid in a cake eating contest while Warren belts out his he-man, raw throated vocals with grit and conviction…not a million miles from Big Ben from Orange Goblin. A certain WG Thorax Embalmer lays down some very tasty lead and slide guitar…though I presume Mr and Mrs Steer know him simply as Bill. This is a righteous slab of fist-in-the-air metal that makes Manowar, in their leather pants and oiled up pecs look like…well…benders!!!!

Calculon hit gold yet again with this beautifully packaged piece of lead heavy plastic. If this hasn’t sold out already there is no justice.