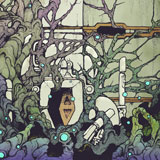 Gone are the days when I ask “What is Heavy?” and you reply “Black Sabbath”. I mean sure, it’s not that the Brummingham Lords of Our World didn’t define all of the templates nor that they’ve lost much of their oomph even now as they approach their ‘70s, but it’s just the case that heavy has moved on to have oh-so many connotations, meanings and interpretations here and now. Within the realms of The Sleeping Shaman’s loose remit at least, you have speedier freaks of likes of say Napalm Death, Bolt Thrower and Repulsion, plus the younger incarnations in Trap Them, Nails, Corrupt Moral Altar etc. Then you have the volume merchants – your SunnO)))’s, your Electric Wizards, your High On Fires, your Sleeps. There’s your gnarly, extreme metal masters of Burning Witch, Khanate, Swans et al. And on top of that you have your newer breed of painfully thought-provoking, near religious, highly technical bombast – Yob, Boris, Inter Arma and Pallbearer perhaps. But if we’re talking heaviness by sheer tonal WEIGHT, then in my view very few bands can come close to the shoulder-clenching, stomach-tossing, Conan-inspiring colossus that is Slomatics.

The Belfast trio are not a new entity by any stretch, and chances are you’re likely to be familiar with their otherworldly take on amplifier abuse. But it’s perhaps not until very recently that Slomatics have hit upon a rich enough vein of material to push their agenda and their relevance forwards into your more average doom listener’s consciousness. Having two great records on the bounce to source from though certainly helps. Both the bullish A Hocht (2012) and the cosmic masterpiece Estron (2014) were both intriguing enough to grasp on to and powerful enough to remain differentiating, whilst perhaps lacking at times in a sense of accessibility. Future Echo Returns, the final of the three album trilogy changes that final step, landing soaring vocal melodies and riffs that labour with the intensity of a giant tortoise on the march to some ancient burial ground in a galaxy very far from our own.

Four-minute instrumental opener Estronomicon is practically a lumbered flex of the muscles for what is about to arrive on your doorstep. Plodding riffage from David Majury and Chris Couzens is once again on the menu as a curious opening tempo floats mostly skyward before bobbling about with some static tension in the air as drummer Marty Harvey prepares to strike with his lungs of steel.

Electric Breath is the start of the album proper; a mid-paced rout through sandstorms, astral dunes and extra-terrestrial combinations of gas and matter.  It retains a starkly traditional doom structure, but the opening gambit of Harvey’s vocal strain from behind the kit sees the drummer’s voice sitting noticeably further up in the mix than on previous albums. As Electric Breath segues without pause into In the Grip of Fausto and as the feedback cackles from the amps in between lulls in the bass-heavy string attack, Marty’s drums remain true to their intentions to pummel and desolate the ground ahead of them, until there’s little left behind to recognise as a planet. Who knows if we’ll ever escape the mighty grip of Fausto? On the strength of this album even so early on, I’m not sure I want to.

Ritual Beginnings, as the title suggests, marks a departure from the skull-breaking riffage of the first three tracks to settle us into a lazy river of serenity. Gentle guitar strums wash over you like a rippling stream across your feet in a deserted forest, as chiming leads slowly enter the fray. This is a Slomatics album after all and so it’s not long before those delicate guitar tremors morph like a cyborg into a very electronic, alien-sounding call for departure and you quite quickly realise that you’re being lulled into a false sense of security that only a great, fat hulking riff is realistically going to engulf.

And so it does. Rat Chariot, as well as being gloriously-titled, is an absolute sledgehammer to the face. Oh my life, what a riff. It’s perhaps up there as one of Slomatics’ very best alongside Return to Kraken and Lost Punisher and frankly if I wasn’t already tucking into my review copy of Future Echo Returns with gusto, I’d buy the entire damn thing immediately for this riff alone. Marty Harvey’s crystalline vocals slip and sway inside the vortex Couzens and Majury warp up alongside him; riding the wave of sound like the “Lord and Master” his desperate cries so commandingly portray. If you’re not nodding your head slowly and dribbling from one side of your mouth by the end of this particular chariot of rats, you’re doing doom wrong, my friend.

After the bouncier call and answer of Supernothing, which sounds like Floor covering a gospel hymn on Mercury, the moment has arrived for Slomatics to put their trilogy to bed and head Into the Eternal. Initially entering the ritual with some monasteric vocal harmonies, Majury and Couzens set the ground aflame with their most brooding, yet solemnly triumphant riffing on all of Future Echo Returns. It’s a slow-burning ride as Chris and Dave scope the landscape ahead, but the outlook is so heavy it’s practically visible in view by the time Marty’s righteous vocals rise high and proud above his ponderous steering from behind the drum throne. When they arise they’re simply variations on “Yeaaaahhhhh, woaaahhhh-hooahh” until the close of business, but not in a cheesy, Hetfield stance, but as a solemn nod in thanks to what it feels like Slomatics are leaving behind and closing the airlock on. Imagine attending your funeral, in space, with the heaviest band from our world playing your casket onwards into the next. That’s what ‘Into the Eternal’ feels like: truly taking you to a better place.

It may be shorter than some of their former outings, but both Future Echo Returns and Slomatics in general as an entity will leave their mark on you, your ears, your soul and what you define in your own mind as Heavy. Is it the pinnacle of the three-album trilogy? I’d actually save that title for the near spiritual experience of Estron personally, but Future Echo Returns is a more encapsulating, in-the-moment summary of this astounding band and expresses a warmer sense of goodbye. That’s not at all to say that the band are done by any stretch, oh no. The best thing about any echo is that it will always return in the future, and Slomatics are loud enough and brilliant enough to reverberate for as long as our world can cope with their prestige-laden glow. Their’s is a ritual that I hope is only just beginning.