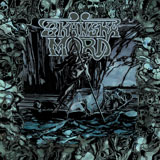 Goddam how do Small Stone Records do it? Their knack for sniffing out killer bands to release is almost supernatural. It’s as if Small Stone head honcho Scott Hamilton is Simon Cowell in some alternative reality where music doesn’t suck!!! I don’t think I’ve ever heard a bad record from the Small Stone stable and Skånska Mord do nothing to tarnish the reputation of their pay masters.

“Paths To Charon” is the follow up to their 2010 debut “The Last Supper” and despite having a title that sounds like some dodgy early 90’s death metal band, shows that Skånska Mord have a heart and soul firmly rooted in the early 70’s.. From the opening bars of opening track, “Dark Caves Of Our Mind” with its fat assed groove, wailing guitar heroics and harmonica it’s clear that these Swedes are out to impress. When Janne Bentsson’s vocals rich bluesy vocals kick in it’s clear these guys have something very special.

This album is a rich amalgam of the sounds that made the 70’s such a revered and sought after decade…”Addicts” throws in a heavy dose of the blues which harks back to forerunners such as Cream and their progeny, bands like Mountain and Cactus with a progressive nod to Deep Purple. To try and find a modern comparison would send you towards bands such as Siena Root who also nail this retro, soulful, bluesy hard rock with a hint of psychedelia. A tour featuring both bands would be a tie dye and patchouli orgy!!! The comparison is particularly evident on instrumental “Laggasen” which rolls along on a vintage mellow jazz groove and betrays some of their progressive influences.

Skånska Mord also know the value of dynamics. Although they sit very naturally in a nice fat heavy groove they are aware that light and shade is a huge part of what makes rock and roll so appealing so when they ease back on the throttle on songs such as “A Black Day” they allow their personality to shine through and allow the vocals to plumb the depths of Bengtsson’s soul!!! The effect is of a heavier, darker Pink Floyd. In contrast a song such as “Lord Of Space And Time” is relentless and heavy with a majestic chorus that shows the band are masters of melody as much as they are the riff. It’s also good to see a band that isn’t afraid of a guitar solo and of stretching a song out to give it room to breathe. You definitely get the impression that this is a band that thrives on the ability to work up songs through jamming together and the effect is almost hypnotic at times.

It’s almost impossible to go through a review of a band so steeped in 70’s heritage with making some mention of Black Sabbath and on “The Ambassadeur” things do take a decidedly darker turn. Bordering on doom Skånska Mord show they’re equally at home with the heavier sounds as they are the more blues based or pastoral sounds. The level of drama they reach on the chorus here would make an entire class of stage school kids look positively autistic!!!

I could write pages pages of rhetoric about how great this album is but the proof of the pudding is definitely in the eating and with Skånska Mord it would be very easy to become morbidly obese on rock!!! Check the menu and order yourselves up a big plateful…with second helpings!!!