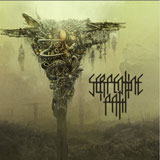 For all the moaning you encounter from people young and old, there’s actually a hell of a lot of good death metal out there these days. Whether it’s the people that founded the genre churning out records that still have all the anger of their youth* (Paul Speckmann of Master, Cianide, Autopsy…) or young upstarts giving the genre a much-needed kick in the scrotum after years of languishing in mediocrity (see the masterful Obliteration, Dead Congregation, Anatomia, Bonesaw etc). But with the saturation levels at their peak,  it’s all the more difficult for a band to make something that truly stands out – after all, you’re unlikely to see anything  particularly innovative in any genre any more, now that the arc of musical evolution has evened out to a slow crawl. In my opinion, the only bands of the last decade that have turned the course of musical history are Earth (see “Hex…”), Teitanblood (“Seven Chalices…”) and Lugubrum (“Albino de Congo”). This début full-length from Serpentine Path does not quite rise to those levels, but makes a very good effort to do so. An absolutely superb effort in every conceivable way, there is nothing “new” about the contents of this record, but I can’t really remember being this floored with a death metal album in a LONG time. I have played these tracks to death (no pun intended) and the hidden subtleties and intricacies only increase with each listen – it’s a stunning piece of work, and a note-perfect progression from the 7” they released last year, blessed with punchier production and more complex songwriting.

From the outset, “Arrows” had me convinced this album would be in the top three released this year; whereas the 7” was the perfect melding of V-beat and Winter, this absolutely immense track owes more than a passing debt to death-metal Gods Danny Coralles and Eric Cutler. Bagshaw has somehow mastered THAT signature sound that makes Autopsy so totally peerless, the creepy “Trouble-being-played-by-a-zombie-on-speed” atmosphere that makes me want to rob the grave every time I listen to “Fiend For Blood”. Few can do it (the aforementioned Anatomia spring to mind), but it’s in full force for this outstanding track. Despite the marked step up in terms of production, the band have lost none of the murky morbidity that made the single a favourite of mine last year, which thankfully rid me of the fear I had that signing to Relapse might result in the kind of sheen that made Toxic Holocaust so much less effective than they were on the first two albums. But then again, it’s the band’s decision how the budget is spent, and Unearthly Trance were no less powerful upon signing to Relapse than before (in fact, arguably better). The only thing that frustrated me about this track was that I can’t for the life of me place the sample at the beginning, I think it’s from a Hammer (or was it Amicus?) film from the Seventies, but sadly my usually dependable cinematic knowledge has been thwarted by an aging brain and the indiscretions of youth…

Onto the second track, “Crotalus Horridus Horridus” (I had to look it up – Wikipedia tells me it’s the Latin name of the timber rattlesnake) – this song is arguably the most reminiscent of the band’s first release, boasting riffs that resemble those of their fellow New Yorkers Winter. Incidentally, it was recently announced that Stephen Flam, who played guitar on all of that band’s legendary output, is to join The Serpentine Path as second guitarist, a move that surprised and delighted me in equal measure! This band already sound the bastard sons of Flam’s previous (only?) band, so it makes their future output an even more exciting prospect! But lest we forget, Bagshaw also played in Ramesses, and the wah/reverb drenched solo in this song is the most reminiscent of that band’s (good) records. The Celtic Frost influence is worn proudly on the band’s sleeve, with the third track “Bats Among The Heathens” sounding like “Dawn of Meggido” being played at 16RPM. If that concept doesn’t give you a heavy metal stonk-on then you’re clearly browsing the wrong website!

And so the record ploughs remorselessly on, not letting up or dropping in quality for a second – “Beyond the Dawn of Time” (I think the sample at the beginning is from “Last House on the Left”…)  showcases Darren Verni’s established ability to channel the spirit of Armando Acosta over the kind of despondent, bleak, early-Peaceville death-doom riffs that the UK’s Volition have made their own**. The band blasts through “Obsoletion”, a dirge that reminds me of Trouble’s first three albums, and “Aphelion”, which will appease the Electric Wizard freaks, with its mid-tempo evil gallop that made “Come My Fanatics” so timeless. On a marginally related note, “Compendium of Suffering” isn’t a million miles off the kind of bone-crushing heaviness to be found on Wizard touring/label-mates Warhorse’s sole album “As Heaven Turns To Ash”, a record that in itself still stands on its own in the pantheon of doom metal. The album comes full circle with “Only a Monolith Remains”, with its perfect blend of Celtic Frost and Autopsy leaving you feeling quite winded and gasping for air (OK, the verbal trickery was intended this time…)

Frankly, this record isn’t just very good. It’s brilliant. Tim Bagshaw (currently the main songwriter) is arguably writing his best music since his days in The Wizard, with Newman, Verni and Lipynsky pushing their exceptional talents to the limit – the loss of Unearthly Trance was a sad one, but with a bastard son as powerful as “The Serpentine Path”, the mourning period can most definitely be curtailed. A fantastic progression from all parties concerned, that has spawned an album that won’t just top the end-of-year lists this December, but is likely to be held in high regard for years to come. The ghost of Eternal Frost is back, and its vessel is “Serpentine Path”.

* Morbid Angel may not entry

** See the split 7” tribute to Winter with 3/4 of The Serpentine Path (Unearthly Trance, in case you’ve been living under a rock for the past decade)