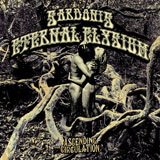 The Japanese get all the coolest things in life first: sushi, bullet trains, ninjas, walkmans, ‘Made in Japan’, and now a largely instrumental split disc between country natives Eternal Elysium and Belgian swamp-dredgers SardoniS. Celebrating the six-date tour of Japan in mid-October that the two bands completed together, this release adds a bonus track per band to the 10” vinyl version (out via Hydro-Phonic Records) and is limited to 500 copies, so extensive AND exclusive!

Belgian two-piece sludgemobile SardoniS (must remember that big S!) have seen their stock price rise in the last 12 months with the release of the excellent ‘II’ record and huge support shows with the likes of COC, Angel Witch, Saint Vitus and Acid King. Opener ‘The Ascending’ is a ten-minute ear-pillage which plants them partway between the intense metallic synchronicity of Black Cobra and the eerie psyche-trip of Ufomammut. Roel’s huge chugging riffs slither and spiral up a cosmic beanstalk as Jelle’s delicious fills and frantic snare pummelling rolls across the craterous surface of Planet Doom. Ten minutes is ambitious for an instrumental with just two instruments, but backed by some subtle chimes, synth-like sound-expansion and enough space dust to get a complimentary nod from Hawkwind, the track becomes an exciting rollercoaster ride that’s as infectious as it is riotous. The bonus kicker track ‘To the Barn!’ hits a higher sense of urgency as Jelle’s feet begin to push the 200 bpm boundary and the riffs edge from a stoner chug into a hardcore-singed buzz. This is as metal as it gets without a bassline or vocals to take you to a richer and more varied sound-base, and SardoniS certainly make the very most of their limited resources with style.

It’s fair to say that Eternal Elysium are more of an unknown quantity across the Pacific than their S-bookended mates but that certainly doesn’t stop their Sabbathian/Kyussian stomping dirge impressing as much, if not more, than their European brudders of the riff do. The Church of Misery-a-like twang of ‘Unbound (Kai Hoh)’ gives way to some boogie-bound 70s riffage, hummable chorus lines and even a saxophone cameo. Yep, that’s right, a sludge sax. ‘Circulation (Jun Kan)’ easily wins the title of Standout EP Moment for me – a gentle country-esque intro leads into a sandstorm of guitars and dry-throat vocals that are as stoner purist as it gets. The trio ramp up the tempos as the circulation gets faster; solos squeal, the singer squeals, the ladies all squeal as Eternal Elysium blow everyone’s collective minds. ‘The Spiral Conclusion’ sounds exactly as it suggests it would sound: a juddering, swaying final outpost marking your way out of the stratosphere and into the realm of the unimaginable. EE’s closer is purely instrumental and swings between desert rock lulls, jazzy overtures, a cheeky drum solo and some doomier psychedelics to lead us to the galaxy’s door.

Bound in a sleek digipack case, this is a more than credible addition to the back catalogues of both bands and well worth tracking down if you’re a fan of either riff troupe. And would you Adam and Eve it! It’s even got a naked lady on the front (and a naked dude for that matter); all-in-all yet further proof that the Japanese really do get all the coolest things first.