A dusty road snakes across a vast expanse of gravel and boulders. A pair of unkempt, windswept figures approach the crest of a hill, their motorcycles silhouetted against the gathering twilight. A chill in the desert air announces the death of another day, as the stars begin to dance their cosmic dance…

Trundling along in a Seattle music scene which boasts more than its fair share of quality doom bands right now, Year of the Cobra are a power two-piece, featuring Amy & Jon Barrysmith on bass and drums respectively. Relative newcomers to the scene – having only formed in 2015 – their latest effort Ash And Dust is by far the most complete recording the band has put out to date, managing to break new sonic ground without drifting into obscurity or self-indulgence like so many of their peers.

It’s stoner-doom, but not exactly as you know it. What I struggled to get my head around when listening to this album is how Year of the Cobra manage to pack such an arsenal of finely-tuned riffs into 40 minutes without compromising on the pacing and overall impact of the record. Yes, the riffs are corking, but more importantly it’s an album with a genuine organic flow, with each track having its own distinct flavour. YOTC have certainly put out some interesting material in the past, but they’ve really nailed the ‘beauty in simplicity’ ethos this time around. If you can sound this polished (not to mention heavy!) with just two members then you’re obviously doing something right.

this is thunderously heavy stoner-doom which combines great songwriting and some interesting psychedelic textures with the more old school, riff-heavy approach that seasoned fans will be accustomed to…

Highlights? Well, The Battle of White Mountain is the first track, and it’s really the centerpiece of the entire album. If the core riff doesn’t have you sold right off the bat, well then, this just ain’t the band for you! It’s a classic one riff song, the kind that you come up with more or less by complete accident, and then the whole songwriting process just seems to flow from it unabated. Combined with Amy’s melancholic vocals, this opening track seems to pan out like a much darker and more mysterious version of Alunah… nice!

There’s plenty of versatility on Ash and Dust too. The Divine is an out and out psych-doom stomp which makes liberal use of the wah pedal, while Demons is more of a 70s-era Sabbath dirge, with some ultra-creepy synth parts invoking a B-movie horror type atmosphere. Album closer In Despair also deserves a special mention. This is where the band bring it down a few notches, offering some respite from their core offering of heavy doom. It features a hypnotic bassline layered over some subtle, Neurosis-esque ambient noise. Amy’s vocals are showcased particularly well here, over the wall of subtly warbling drone. It’s a great way to round off a truly memorable album.

In summary, then, this is thunderously heavy stoner-doom which combines great songwriting and some interesting psychedelic textures with the more old school, riff-heavy approach that seasoned fans will be accustomed to. The result is simply a neat package which is both contemporary and unfussy is its approach. This slab should definitely be under your Christmas tree, along with a bottle of Wild Turkey and those reindeer socks you’ve always wanted! 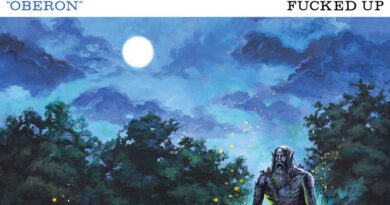