I’ve been caught out a few times recently by bands not sounding how I imagined based on their name. However, I thought I was on pretty safe ground with this one – if you’re called Wolftooth, have titled your album Valhalla and use that cover art, then I think if you’re not going to record some old-school metal heavily featuring mythology, warfare, and mythological warfare in the lyrics, you’d be open to some sort of prosecution under the Trade Descriptions Act. I’m pleased to report that Wolftooth deliver on all of those fronts, with nine tracks (excluding a short instrumental intro) of NWOBHM and thrash flavoured riffery, with a dash of heavy rock added in.

Wolftooth are a four-piece from Richmond, Indiana and Valhalla is their second album, a joint release by Ripple Music, Cursed Tongue Records and Ice Fall Records. Despite being a relatively new band, all the members have been around for a good while and I think that shows in the quality of the song-writing and musicianship on display.

Overall Valhalla is a really good record, but I’m going to break with tradition and get my minor gripe out of the way first. The production on this record is just too clean and polite for me, and I think that’s largely due to the vocals. Don’t get me wrong, Chris Sullivan’s voice will probably not be to everyone’s taste (it’s quite high-pitched and a bit nasal), but I can’t say that’s really the issue for me. I think my problem is that it sits high in the mix and the way it’s recorded has a processed quality that makes the whole record sound a bit too polished and shiny. It’s certainly nothing serious enough to spoil my enjoyment, but I reckon this album would have sounded all kinds of awesome with a grittier, rawer tone.

Now that I’ve got that off my chest, we can talk about all the good stuff, of which there’s plenty. Do you like chugging, palm-muted riffs? Melodic guitar breaks? Soaring choruses? If your answer to any or all of these is yes, then you’re in for a treat. First track proper The Possession exemplifies all of these, combined with an unexpectedly introspective chorus. It’s really cool, and reminiscent of the more metallic tracks from Grand Magus’s Iron Will album. Lead single Firebreather comes next and artfully mixes more thrash-style chuggery with some strutting 70s hard rock guitar. It doesn’t hurt that the chorus is one of those ones that pretty much demands you sing along and hold your beer (other drinks are available) aloft.

The song-writing across the whole album is rock solid, so I suspect that a track-by-track breakdown of me trying to describe why each one is great might start to get a bit repetitive. Particular highlights for me though include Scylla & Charybdis, taking the voyage of Odysseus and turning it into an epic metal anthem replete with a ripping instrumental section, and Crying Of The Wolves which comes with an awesome, head-nodding riff for the verses.

Wolftooth save the best till last, as album-closer Juneau is another cracking tune. Telling the story of five brothers dying at sea, it features the band’s trademark mix of heavy rock swagger and old school metal bite. As ever, there’s a great chorus and pretty tidy guitar solo as well. It’s such a good track that it prompted me to look up Juneau on Wikipedia, which turned out to be an American light cruiser sunk by a Japanese submarine while retiring from Guadalcanal in 1942 for repairs. The five Sullivan brothers on board were all killed, although two of them survived the initial explosion that sank the ship. So there we are: rocking AND educational. What more could you want?

Truth be told, I wasn’t initially taken with this album because of the production, but I’ve been spinning it (figuratively at least) for the last six weeks and it’s a real grower. If you’re up for fifty minutes of top quality old-school metal you should start here. 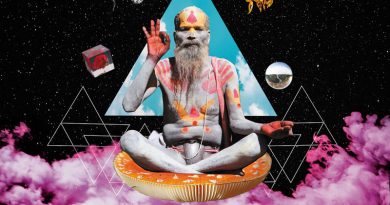 Review: Ten Foot Wizard ‘Get Out Of Your Mind’