APF Records newest compilation The Sound Of Heavy 2020 is a gargantuan twenty six track monster of quality bands, brought to you by one of the foremost purveyors of quality new bands that are making the rounds. Not since Earache Records in the 1990s, with their Earplugged compilation series, has such a great example of a shining roster been pieced together in one incredible package.

Long before Rock Sound, Metal Hammer and Terrorizer gave away CD promos for free on magazines, the Earplugged series was the must have for metal fans, it always had a full collection of some of the more extreme bands of its time, courtesy of its owners, Earache Records.

APF Records The Sound Of Heavy 2020 is a return to that long-forgotten time, and with its twenty six tracks, it’s a beast of a compilation. Right from the off, this album is track after track of full on assault, and its taking no prisoners. The twenty six tracks are like a full on aural attack, a non-stop kick to the face.

There isn’t one bad track here, its solid, from Beggar and Blood Moon to open, right through to Under with An Inch Of Sun to close, it shows what a thriving industry the metal music scene is, and all of its sub genres are, and this collection is a shining example of just what can be found if you dig deep enough.

There are so many highlights here, that it would be hard to go through it all and keep the momentum of this review as lively as it needs to be by listing them all.

Most of these bands are new to me, there are a couple of bands I recognise, Possessor are here, and that’s fantastic, because after seeing them with Black Moth last December, I’ve been wanting more ever since. And The Hyena Kill, so goddamn cool, and after witnessing them support Max and Iggor Cavaleara In London a couple of years ago, to watch them go from strength to strength with APF is fantastic.

If you like your music hard, and heavy, some stoner, some doom, a little bit of hardcore, and a dash of unique, then this is the album to part company with your hard-earned cash for. It will introduce you to so many new favourite bands, that its hard not to impress on you just how relevant it is.

This album is so wonderfully rich in its scope of bands, and truly shows what a wonderfully diverse scene there is, and that it’s still pumping blood like the ferocious beast that it is…

Particular favourites for me were Beggar and Blood Moon, with their guttural growls and full on doom beat assault, and Battalions with Goat Feeder, a growling chugging beast.

Tides Of Sulfur’s track DLMM, is so different, yet with a grindcore sound we can recognise all too well, and Video Nasties with Hanging Tree, and its Rob Zombie/ Murderdolls horror feel.

Nomad’s Shallow Fate, and its lavish Biohazard meets Sick Of It All hardcore, and then there’s Trevors Head with ‘Bomb’, and all the early TOOL comparisons that can be drawn.

Even The Grand Mal with Explode, something new, yet familiar, and the closer, Under and An Inch Of Sun, inviting us in to their psychedelic nightmare.

This isn’t to say that the rest pales in comparison, truth be told they’re all fantastic, I chose a few here because they all had a uniqueness in them, which made them stand out as part of this collective, and were different enough to give it some really nice layers, and not just a one speed, single track thread from start to finish.

I would also just like to applaud one of the best band names I’ve heard in a while, Trippy Wicked And The Cosmic Children Of The Knight, what an incredible name, and an equally incredible track to go with it, Carat.

The award for best song title has to go to Tronald for their insanely bizarre Get Your Grubby Little Hands Off My Bennel, and second place to PIST with the very eloquent Fuck Off And Die, a great title, for a great tune.

This album is so wonderfully rich in its scope of bands, and truly shows what a wonderfully diverse scene there is, and that it’s still pumping blood like the ferocious beast that it is, and for that we really should thank the likes of APF Records, who are truly pioneers in keeping the music we love going, and thriving.

It should also be noted that all profits from the sale of this compilation will be donated to the South Liverpool Food Bank. The amount raised from pre-orders alone was £328, so download it now for just £1 (or more) or order the double CD for £5 (or more). 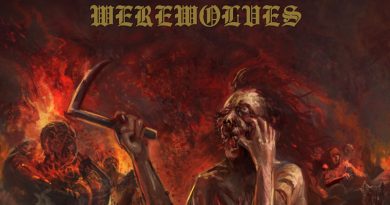 Review: Werewolves ‘What A Time To Be Alive’