That band name. That album title. They say so much, promise so much hulking slo-mo cosmic shenanigans that the Great Old One, the Black Goat of the Woods with a Thousand Young, would adopt it as its battle anthem. Amazingly, Acid Doom Rites mostly lives up to everything that it promises, the Russian trio of SAA, KKV and PAN crafting four truly massive slabs of droning, fuzz-caked doom that take a handful of top-shelf riffs, stretch them out over 77 minutes and use them as the framework for a dread ceremony that takes serious willpower to pull yourself away from.

Attempting to delineate these four cuts raises some problems as the album works best when taken as a single, sprawling odyssey, letting the riffs and the warm hum of KKV’s subsonic emanations wash over and gradually sink into the bones. There are numerous deviations throughout, particularly when it comes to SAA’s contorted solos that sound more like guitars locked in battle than in harmony, shifting the flow from something more grounded and propelling it skywards. Likewise, the vocals throughout typically register as low, murmured liturgies, helping to sell the ‘dread ritual’ vibe that the music tries so hard to evoke, but they aren’t afraid to lapse into a ragged sludge croak just to remind you that you are, in fact, listening to some HEAVY FUCKING METAL.

That said, the album’s lengthier cuts are truly special, with Eternal Trip (Entering The 4th Plateau) taking up 25 minutes of the album’s runtime and fully utilising every second to pull the listener deeper and deeper into the transcendent. It’s here that Megalith Levitation’s psychedelic leaning are fully manifest, the guitar work sitting on the right side of meandering but inexorably building up into a musical depiction of blown synapses.

…the guitar work sitting on the right side of meandering but inexorably building up into a musical depiction of blown synapses….

Conversely, Smouldering Embers (Pyromagic) takes up a similar amount of time but instead of wonder, creates a smothering atmosphere of horror. The riffs are still huge but they’re given real weight here, towering like an army of colossal hairy warlocks and crushing all beneath their subsonic staffs, and it provides a subtle contrast that carries the album to a satisfactory climax.

This isn’t a breezy listen by any stretch but, despite its length, it never feels like a slog. There’s an intuitive grasp of just how long they can milk a riff before something has to give and when they’re ably paired with droning chants and kosmische embellishments, it feels truly consciousness-altering. Like if you concentrate hard enough or give it just one more spin, you’ll be able to peer into the eye of the universe and milk its secrets. Then again, maybe it’s just a solid psych-doom record to while away the hours before the next Ufomammut album – either way, it’s an impressive start. 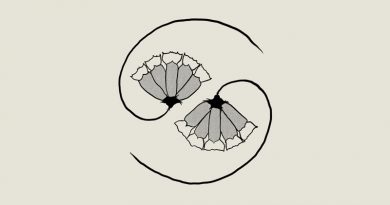