Some 20 years ago, Gorilla released Maximum Riff Mania. One of those bands which formed in the 90s and stuck to their 60s and 70s influences despite what might have been going on around them. Recording at the all-analogue Toerag studios in London, the band laid down ‘9 thunderous slices of fuzzier than fun Heavy Rock classics, incorporating Stoner Fuzz, 70’s Doom, hi-energy garage rock and punk.’

At the time, vinyl was incredibly specialist, so the album was confined to CD and released on the now defunct Luna Sound. For a band with their roots so firmly planted in Rock’s golden age, it’s only right that their debut album has now been given a very special vinyl release. Limited to 300 copies, signed and hand numbered, pressed to red wax, and including a CD and inserts.

Gorilla describe themselves as ‘fuck the safety net’ Rock ‘n’ Roll. Played live, no bullshit, do or die. It’s fun, it’s got attitude, it’s a good time. It’s noisy and dirty and heavy and raw. Rock ‘n’ Roll the way it’s meant to be. But Gorilla don’t play it safe with their sound, either, because among all of the pandemonium, there’s unexpected moments that cut through, from 60s Garage Rock harmonies and waves of Psychedelia, to the wry lyrics and jarringly heavy riffs.

Good Time Rockin has that blend of the 60s and 70s down perfectly. A simple melodic chorus, a vintage solo, and a mix that’s raw but clear, where every instrument is heavy and dirty but separated, so you can hear the crash and boom of the drums, set apart from the bone rattling guitar fuzz and pounding bass. The main vocal has that 60s cool and heavy 70s tone, with the distant reverb of the backing vocals giving it real attitude. ‘Good time comin’ and it’s not too far!’ A simple line, but it sets up the album perfectly.

Coxsackie begins with a straining and a creaking, like everything is about to come crashing down, and it does – with a massive crushing Doom riff accompanied by a glorious Rock ‘n’ Roll swing. With lost-in-the moment leads and a riff/vocal break/riff format, this is inexplicably both sweaty and cool. The bass rumbles, the leads sear, the drums smash, and the vocals drawl and yell: ‘the Demon’s Eye got me in its sight!’ Then things build and build, drums filling like crazy, bass wandering, and then a sparing but captivating guitar solo takes you through to perhaps the heaviest moment on the album.

Roachend Salad has the coolest ascending and descending pentatonic riff, the sort that’s tried and tested and true, but still amazing when it’s done right. This song has everything that’s great about hard and heavy Rock ‘n’ Roll. Totally bad ass, and some of the best vocals on the album (listen out for that ‘woohoo!’). Not content to just stick with one good idea, Gorilla switch it up again to another driving excursion with high gain pulse and soloing, then a welcome return to that main riff.

After all that heaviness, She’s Got A Car comes as something of a surprise with its 60s Garage riffing and vocal, complete with rich layering and harmonies. The melodies are delivered with a rawness that’s both carefree and primal, then a couple of minutes in there’s another sleazy and saturated solo screaming above the heavy noise. And you can’t help but smile at the literal tongue-in-cheek lyrics. Then there’s another surprise in store with the short country-tinged acoustic break of Buzzard.

Maximum Riff Mania takes 70s riffs and sounds, 60s songs and harmonies, and drenches them all in incredibly Heavy Fuzz and Noise…

Nowhere To Go But Down is a slow head banger, with bluesy guitar soloing, flick-wristed fills, and some down-on-your-luck harmonica. This song is a great example of Gorilla‘s unique bass playing. It’s huge and heavy, distinct and doing its own thing, but it never overwhelms the songs. Bass and guitar weave in and out and work together, complementing what the other is doing by taking turns to carry the riff, breaking away to take the lead while the other supports, or just making a bunch of heavy noise in unison.

My favourite line has got to be ‘the moon’s just a rock that’s dead – that’s what I said’ from Acorn Brain. Like the best Rock lyrics, it’s both meaningless and profound. The song itself is intriguing and unusual, psychedelic and skulking, laid back but focused, with tidal drum fills, disorientating bells, and a Roky Erikson style vocal. Then things take off with a lumbering beast of a riff, before more twists and turns bring everything full circle.

Forty Winks captures the spirit of all of those heavy fuzzy 70s bands which were ahead of their time. Relentless fuzz, riffs and melody, and vocals buried in the wash, while Day Blindness is another 60s Garage gem. A little more psychedelic with a big nod to The (‘orrible) Who and some top drawer Entwistling on the bass. Good times and feeling alright, but another surprise in store with a delicate chorus.

It would be easy to sing Gorilla‘s praises as a Heavy Stoner band and tell you it’s all about the 70s riffs and tone, but for me, the most interesting element is the 60s influence. There are many subtle characteristics which aren’t always apparent on the first few listens and there’s a lot more than just carefree rocking here. Sure, it’s a good time, it’s Rock ‘n’ Roll, but this is a wonderfully crafted album that seamlessly brings together a lot of different influences and ideas. It’s firmly planted in familiar territory, but Gorilla take that and create something new.

The album closer Iron Ball is ten minutes long. With the introductory clean guitar setting up the shock of cavernous drums, jet phaser guitar, and immense heaviness. There’s more far out psychedelia with a heavily effected vocal that’s delayed and echoing, words ricocheting higher and higher as the drums and bass prowl together. The last few minutes break free from the mire for a high energy Rock out, all thundering drums, lightning solos, and pounding bass raining down.

This new vinyl release will be a must-have for existing fans. And now is the perfect time for everyone else to check out it out, too. Maximum Riff Mania takes 70s riffs and sounds, 60s songs and harmonies, and drenches them all in incredibly Heavy Fuzz and Noise. If I haven’t made it clear, the album is HEAVY. Not just weighty, but noisy and dirty and mean, heartfelt and real. Played with guts and passion. In other words, it’s Rock ‘n’ Roll – the way it’s meant to be. 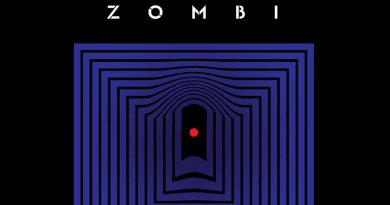