Perhaps it’s because this is my first year as a music ‘writer’ and I’m way more in-tune, and up-to-date with upcoming releases in the broad spectrum of underground music we cover at The Sleeping Shaman, but I cannot recall another time when so many killer releases dropped the last few months of the year. Putting my year-end, ‘Top Ten’ list together was anxiety-inducing enough, and that was before the much-heralded new King Buffalo (admittedly, I still haven’t absorbed it yet) dropped, and before I had a chance to listen to the second full-length, Blood Of The Old Gods by Long Island, New York’s Restless Spirit.

I was vaguely familiar with the band but went into this review not really knowing what to expect. First of all, Blood Of The Old Gods is an immense album on all levels. The density, sprawl, and flow are some of the things I noticed right off the bat. Additionally, the theme of the record deals with rejecting the many ills that have plagued society, most certainly the last few decades. The bands stated influences Sabbath, The Sword, and Type O Negative are legitimate, but I hear so much more going on. I actually had to double-check a few times to verify this was actually a power trio.

Blood Of The Old Gods opens with the acoustic The Betrayer, a sparse, beautiful number plucked by vocalist/guitarist Paul Aloisio. However, lets the listener think this is going to be a mellow journey, Aloisio lays some distortion, and volume manipulation across the top, giving the listener just a hint of menace, and an idea of what’s coming before Restless Spirit explode into Judgement And Exile.

Reminding me of the push of Lore-era Elder meets the riffy-prog of Blood Mountain-era Mastodon, Judgement And Exile is a dizzying, jaw-dropping statement of intent. There are so many twists and turns, just as the listener thinks the song is winding down, Aloisio breaks out another riff, or bassist Marc Morello and drummer Jon Gusman make another tempo-change.

Crooked Timber Of Humanity changes things up a bit, offering a less frantic tempo, as well as again conjuring up some more Mastodon-esque thoughts, this time Crack The Skye-era as Aloisio displays his sense of melody with some pretty awesome single note riffing. He also shows off his range with some pretty soaring vocals, made all the more impressive by the fact he’s singing, riffing AND playing lead guitar.

a vivid display of this band’s musical prowess, and ability to craft doom-prog epics of this magnitude…

Lead single Cascade Immolator is an immense, chugging, riff-monster. I mean, Aloisio displays his arsenal of riffs, and lead work, but his melodic vocals keep everything balanced. Not to be outdone, Gusman displays some pretty dizzying fills as the song closes out. There’s a real ebb-and-flow on Blood Of The Old Gods, as the songs are all long but never overstay their welcome. The centerpiece of the record is undoubtedly the title track. A gigantic, charging, flowing, doom-prog-epic, that brings everything together Restless Spirit have introduced prior to the title track and to mind-boggling effect. Aloisio also unleashes one of the nastiest, crunchiest riffs on the album towards the outro, if that doesn’t have you banging your head, then you are most certainly hard of hearing, or have shitty taste in music.

The album closes with Haunted. One of my favorites, it again puts on a vivid display of this band’s musical prowess, and ability to craft doom-prog epics of this magnitude. Aloisio’s riffs, leads, and vocals are once again notable. His riff as he closes Haunted while singing ‘So wrong, for so long’ is just massive. The man can sing, riff, shred and craft a song with all the best in underground, heavy rock. I admit I find musicians of this caliber pedestal worthy as it is no easy task to play guitar like this while simultaneously singing. However, it’s not all Aloisio, as Gusman and Morello more than hold down the low end, providing the weight and heft that compliments Aloisio so well.

I spun Blood Of The Old Gods multiple times before writing this review. I really had to sink my teeth into this record. There’s is so much going on, so many layers, so many riffs, leads, fills, to say nothing of trying to decipher all of Aloisio’s lyrics, so as to grasp the concept behind the album as robustly as possible without a lyric sheet. Restless Spirit have been able to throw all their stated influences into a blender, heavy on the early-Mastodon, I’d throw some Elder in too, to create a record that seamlessly blends these influences without sounding like any of them. This really is an excellent album that had me sweating at my aforementioned year-end picks. Highly recommended. 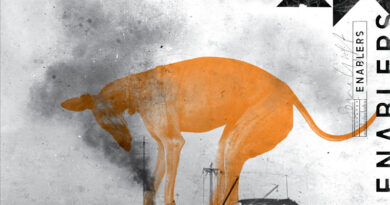