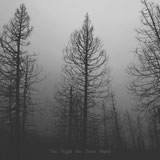 Hastings’ ROTS have been around since 2006. Formerly known as Rise Of The Simians, the group once traded in what they themselves describe as “orthodox sludge/doom”. 2007’s self titled demo was followed two years later by The Cursed Law Of Thelema EP, both of which were well received (the latter reviewed here). I’m going to have to come clean and admit that I failed to get my hands on either release and have only heard a couple of tracks from that era of the group. In April of last year ROTS opened Desertfest in Camden and their latest release – three track EP ‘The Night The Trees Burnt’ – was recorded soon after.

‘The Night The Trees Burnt’ starts out as a portentous funereal march before blossoming into a steady, woozy groove. Luke Bolton’s strong sore throat vocals are the only real evidence of past sludginess here; a fuzzed out bass drop-down opening the floodgates for the track to build and shift into Black Metal territory. A second drop-down, this time into phased-out post-rock sparseness, follows. A tom thumping build-up stops wilfully short of the anticipated return, leaving the riff to ring out mournfully.

‘Great Sleep Into Oblivion’ opens with a Logan’s Run sample and, to be fair, it’s hard to find fault with that. What I did find fault with however is how loud one guitar is in the mix throughout the song, and especially in its intro. I’m positive it makes me sound like an arsehole to even mention it but –particularly as a headphones listener — it did really pop me out of the track. Moaning aside, ‘Great Sleep Into Oblivion’ galumphs along weightily and doomily enough; convincingly evoking spatial immensity.

The stand out track of the record is closer ‘Beads Carved From Bone’ which is a powerful, spiky, and accomplished lump of Blackened Sludge. Its satisfyingly sparse yet epic ending seems to echo the record’s beginnings, bringing the EP to a pleasingly ouroboros like conclusion and making revisiting the whole thing again almost irresistible.

Even with my limited knowledge of ROTS prior work,’ The NightThe Trees Burnt’ sounds very transitional to me; like an established band moving into new territory, searching for a new sound. I think that’s the reason the EP – listenable and enjoyable as it is – doesn’t quite feel like the finished product I expected from a group in their eight year. In all probability, that’s no bad thing; it’s refreshing to listen to a band pushing themselves as opposed to settling into a well ploughed rut and I’m definitely looking forward to hearing what ROTS come out with next.

‘The Night The Trees Burnt’ is available to download as Name Your Price from the ROTS Bandcamp page while CD packages featuring the evocative photography of Eric Flaker are available from the ROTS BigCartel store.