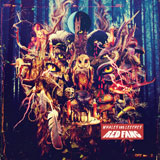 Portland’s finest band have emerged from two mindblowingly good albums that harken back to the likes of early Torche yet with slightly more kick from the proverbial guitar-rodeo. After the success of Murder the Mountains and their self-titled first album, Red Fang are back with a fucking sledgehammer of an album, Whales And Leeches.

Opening this new release is a track that puts its balls in your mouth, whether you like it or not, this is a thunderous riff that is matched perfectly to the Sherminal’s flesh rotting beat. You’ll be playing this for years. ‘Doen’.

‘Blood Like Cream’ pounds its way in shortly after the silent interlude with all the force of train wreck, mixing different textures on this track, Red Fang prove that they have the whole twin guitar thing down; and they are threaded between each other like the snakes in a cool-box.

Next track ‘No Hope’ is one that Red Fang treated to fans to a listen a few months back, capturing all the classic sounds that the band are best known for, it’s almost like hearing Prehistoric Dog for the first time, all over again.

The listener’s ears are greeted with what sounds like a track that has its own V12 engine fitted, aptly named ‘Crows In Swine’, another behemoth track that fits with Whales And Leeches like you wouldn’t believe. Twin guitar attack returns here alongside breakdowns that are now incorporating synth-style UFO sounds in the back, grand.

The next track, ‘Voices Of The Dead’ is a standard Red Fang romp which I guess would be ideal for cruising around in the car when it’s pissing it down and freezing cold. There is enough meat in this track to warm your flesh.

‘Behind The light’ is blasted out of the speakers next, like taking a golf ball to the face, this track blends in the all the bits we dig about Red Fang, monstrous riffs with borderline ethereal vocals. The pace is increased on this track which brings the listener back up after the dirt in the last few tracks.

‘Dawn Rising’, a riff to leave you feeling lost eventually thumps down into some seriously morbid doom. Breathing and doom, best mix until the ghost of Dio joins the band for the melodic parts. This is where Red Fang keep their fucking diamond. There’s even a touch of the ‘ever-welcome’ Sabbath worship to close…

The Sabbath worship continues into the beginning of ‘Failure’, it swings in like a slow glass wrecking ball that is swinging aimlessly amongst skyscrapers. This is shaping up to be one of the best things to come out of 2013…and there have been a few contenders for the title…

Stamping on the gas for the next banger is ‘1516’; numbers as song names or band names for that matter is always a good move. This track vamps itself up into a riff-workout that has enough beef to feed an army. Great fuzz sounds are utilised throughout this record with excellent recording techniques.

‘This Animal’ bullies its way in towards the end of the record, this again is another Red Fang stormer, not anything new on this track really, it does have all the trademark Red Fang qualities but wouldn’t necessarily stick in the mind apart from the awesome space noises at the curtains…perhaps a music video for this would help.

Space noises bring in some of the best of Red Fang riffage in the album’s closer, ‘Every Little Twist’ is another diamond that they saved for the albums final coffin nail. This is probably the finest stuff I’ve heard from them, on Par with Throw Up and Humans Remain, Human Remains.

If you bought the last two albums, you would be stupid not to buy this!