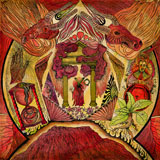 Music is all about emotions. Every time a fan listens to a record, the goal is to feel on top of the world, no matter what style he or she chooses. And then, there are cases where the sounds are so abstract and surreal that listening to them is a religious experience. Enter Pylar.

Hailing from Spain, the band was created by Orthodox and Blooming Látigo members, being already famous for its live performances, where they disguise themselves with masks and robes. Their lyrics are very spiritual, dealing with alchemy, ancient religions and occultism, and their sound… well, it’s hard to explain, but let’s just say it’s a psychedelic journey into experimental territories full of noise, free improvisation, ritual chants and extreme metal.

The first song ‘El Pylar Ha Sido Alzado’ gathers every element mentioned above, featuring weird chanting, schizophrenic vocals, ethereal keyboards and guitars with heavy distortion effects. As the music plays, it becomes clear these tracks flow naturally, and each segues seamlessly into the next. It’s up to the listener to carefully analyze the music in order to fully understand what’s going on here but even then, that is not entirely possible, so simply enjoying this might be a better option. After all, who said art should always be understood? Why can’t it be simply felt? This is pure avant-garde stuff, a gateway to another dimension where all are free to explore a new and unique universe.

This description might be a little too poetic, but musically speaking, how can one really discuss this debut? There are elements of doom and jazz – that much is clear – but those are only pieces of a complex puzzle, where spoken word and the aforementioned chants are also included. As stated previously, listening to this band’s music is a challenge – even they admit it – but the final product is great.

In a way, the nature of this project can be compared to David Lynch .Confusing? Sure, Pylar play music and Lynch, though a musician himself, is better known for his work as a film director and actor. But if we think about it, some of his movies are hard to understand, but they are still cinematic masterpieces. When it comes to Pylar, there’s a similar artistic duality. What some might find strange, others might think it’s brilliant. ‘Poderoso Se Alza En My’ is like their ‘Mulholland Drive’. That neo-noir film, despite being praised by many critics, still managed to stir up controversy, with several people trying to understand its meaning. In the end, what Pylar do as a band is also as enigmatic as it is enchanting. This is the type of record you may not love at first, but still go back to constantly. The next thing you know, it’s one of your favorite albums.

‘Poderoso Se Alza En My’ is one of the best experimental releases of the year, and deserves to be recognised. In other words, go get it and enjoy the ride.