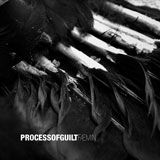 As I write this the United Kingdom is in the process of flooding; in my home town of Oxford we’ve just had a month’s-worth of rain in 24 hours. Some towns in Northern England have had to be evacuated as the deluge threatens to burst riverbanks and cause sewage to flow into people’s houses, ruining their possessions, upturning lives in the process. For a bit of perspective I checked the weather in Process of Guilt’s native Évora, Portugal; thirty-one degrees. You’d think such a sunny clime would inspire a happier disposition in a band but Fæmin, Process of Guilt’s third album, is the perfect soundtrack to an apocalyptic British summer.

Fæmin is a pretty fully-realised album – on the one hand there’s not a huge amount of variation on these five songs, all of them following a similar blueprint for heavy, oppressive sludge; on the other hand this is one of the album’s greatest strengths. Process of Guilt play a sludge-doom hybrid; they are too tight to be lumped in with many sludge bands and too visceral and dynamic to be compared to most doom bands from either end of the spectrum (from Sabbath to Sunn O)))). Instead the band strike a balance between a sludge sound, a doom atmosphere and an underlying post-rock, math-intelligence which recalls the likes of Neurosis.

The band work on the principle of creating tension and then allowing it to spill over in bursts of controlled aggression – an ebb and flow of bitter, seething emotion which runs its course over the duration of the whole album. Indeed the album works best a whole and the songs are even linked by overlaps of distortion giving the impression that Fæmin is almost one long, angry song.

The tense rhythmical chug of guitars and toms on opening track “Empire” soldier on like gathering storm-clouds for six minutes before the clouds burst and a rain-cloud of aggression is unleashed, singer Hugo Santos letting rip like a wild boar on a rampage. And if “Empire” sounded like a storm, second track “Blindfold” sounds like licks of fire falling from the sky; frenetic, serrated guitars form a bed of noise which are counteracted by the swaying rhythm of the half-time drums and Santos’ vehement, venomous roar. But it’s not all bombast – penultimate track “Cleanse” is an atmospheric slow-burner and most of the songs have moments where the storm lets up, even for a brief gasp of air, before the sheer swamping humidity of the riffs threaten to suffocate you again.

Until now Process of Guilt have not made much of a name for themselves outside of mainland Europe but Fæmin could well be the album to make them known far and wide. So as the rain continues to fall and the sun only occasionally manages to break through the clouds here in the UK, it’s hard to think of a more suitable album to be the soundtrack to another ‘wonderful’ British summer. Consider Process of Guilt honorary Brits.