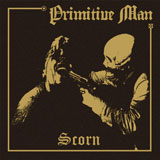 Woah… We’re not even that far in and yet here already is a contender for 2013’s heaviest album from a band who have seemingly come out of nowhere. No mean start to the year I think you’ll agree.

If ever a band have chosen a name that encapsulates their nature, it has to be Primitive Man: this band is zero intellect music. I mean that in the best possible way here of course, it’s the sonic representation of our basest instincts, our most Neanderthal and brute characteristics set to a bleak metallic pummel. Arriving seemingly out of nowhere with a fully formed vision on this debut album, the Colorado based group offer up a pounding and utterly bleak take on the doom/sludge template.

Unafraid to speed up to a Discharge styled punk pace when the urge takes them or inject a startling experiment in darkened ambience, they’ve created an overwhelmingly nasty sound for themselves. Less bongs and wizards or 70s rock, the negativity and nihilism here appears to have roots more in the darkened recesses of the Bovine Records catalogue if anything (indeed the connection to grinders Clinging To The Trees Of A Forest Fire and Death Of Self suggest that might be intentional). The filthy production, the stomach churning guitar tone, the guttural bellowing vocals – everything here sounds utterly diseased.

Kicking off with the 11 minute title track is a ballsy move – it incorporates everything that’s great about the album in the space of one song: a monstrous but upbeat opening few minutes that segues into a lengthy passage of purgatorial sonic wallowing. Songs that follow like “Rags” and “Antietam” follow this super heavy and dismal path, but don’t simply repeat the steps – each song carries its own identity. And when they move into the SPK-like eerie industrialism of “I Can’t Forget” or the full on D Beat of “Stretched Thin”, it doesn’t feel like they’re veering off into unnecessary experiments – it feels like they’re just using different tools to add a different shade of grey to an already dark picture. And where most bands tend to peter out over the course of an album, the closing “Astral Sleep” opens with one of the best riffs on the album. Classy.

This sounds huge for a three piece. The guitars fill every inch of space, with open strings hanging over the grinding chords. The bass packs a punch to the gut and the drums slam down hard – the meatiness of the rhythm section combined with those clanging notes is almost dizzying at times. Vocally, we’re in grizzly bear territory that’s not a thousand miles away from Hevi of Corrupted.

An intense listen that definitely won’t be to everyone’s taste – but definitely a taste worth acquiring. I honestly can’t recommend this album enough and I’m excited to see what corners of hell they drag us to next.