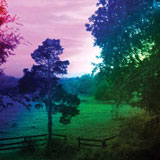 The brothers Carney, otherwise known as Pontiak, make a welcome return with this, their first full-length recording since 2010’s Living, somewhat breaking their ridiculously fertile and productive 2008-2010 streak of five albums in a two year span. Last we heard from the brothers was Comecrudos, an EP comprising one sprawling, dusty twenty-five minute track split into four ‘movements’ and a slight diversion from the usual for the Carneys, but this time things are a lot more succinct and to-the-point – Echo Ono is, essentially, a ROCK album.

A raucous rawkin’ riff welcomes us into opener ‘Lions Of Least’, a punchy li’l number that bops along on a groovy bassline from Jennings Carney, shaded by ghostly organ while lead vocalist and guitarist Van Carney alternates between modal drones and that big-ass rawkin’ riff.

Leading straight in from the first track, ‘The North Coast’ shuffles in on a low-key groove of gently tumbling drums, looping bass and hanging chords before knocking things right up to the max with a firmly in-the-red recurring guitar and drum eruption. Van’s pleasingly melodic vocals here are shaded by cooing background harmonies from his brothers to fine effect, taking the rough edge off of the amped-up guitar roar to some extent.

Now, ‘Left With Lights’ allows EVERYONE to kick things up a notch and let rip with tumbling drums, bass hammer-ons, strident guitar and some very impassioned vocalising alongside a throbbing hypnotic groove.

‘Across The Steppe’ motors along on an insistent bass driven rhythm that verges on Krautrock, given additional colour by jangling guitar and sweet backing vocals, ‘The Expanding Sky’ has a laidback acoustic swagger to it and some lovely echoing slide guitar, reminiscent of the mellower material of The Flaming Lips; something given extra weight by Van’s plaintive singing and a vaguely melancholy air.

This acoustic strumming and easygoing gait continues through into ‘Silver Shadow’, as does the slide guitar, however, as the song progresses it gains a darker hue as the sound of the song appears to collapse underneath its own weight, thanks to some artfully-applied compression and FX.

‘Stay Out Of Sight’ takes the darker edge and the acoustic feel and runs with it, adding a somewhat motorik beat and stressing the slide guitar more. Insistently rolling rhythm carries this subdued number along to its conclusion.

Fading in on a wave of undulating feedback and splashing, slow-burning percussion ‘Royal Colors’ becomes a malevolent juggernaut of black psych, driven by shrieking acid-fried guitar, pulsing bass, dark organ and hushed vocals, throbbing along like a particularly tranced-out version of The Doors.

That leaves only the deeply fried splurge of ‘Panoptica’ to close out Echo Ono, a howling vortex of metallic guitars and a relentlessly stomping and throbbing bass and drum double-team that brings things to a crashing end, much like the Manson murders brought the ‘Peace and Love’ era to a screeching halt way back in 1969.

Pontiak are one of those bands that seem to have been unfairly labelled with the ‘Stoner Rock’ tag, but having listened across the arc of their career to date, and putting particular emphasis on their last two releases, this restrictive label is something that truly can no longer be applied – Pontiak are very much a ROCK band, ploughing their own furrow and walking their own path. Echo Ono stands as a culmination and a milestone that shows the Carney brothers to be very much as masters of their own domain.