When Shaman Lee asked whether I was interested in reviewing Odd Circus‘ latest four track EP Arch Nova, I joked I should be nicknamed ‘Skonk’ for the amount of jazz influenced releases I cover, although admittedly I do have something of a penchant for jazz and its associated genres.

Ahmad Lutfi a.k.a. Pert Doherty‘s artwork reminds me of the nautical themes of both Julian Cope’s Peggy Suicide and 10CC’s Deceptive Bends while Arch Nova is something of a mini concept piece as the band explain in the accompanying promo-notes; ‘We imagine a post-apocalyptic world littered with man-eating mutants, as our main character navigates his way to humanity’s last refuge — Arch Nova. Along the way, a relentless killer and former military commander chases him for sport’.

Maniac kicks off proceedings and you are immediately struck by the bass whose prominence cannot be ignored. The thick funk influenced sounds immediately recall my Primus listening days, as well as very early Red Hot Chilli Peppers and the Minutemen, essentially any band where the songs are largely driven by the Bass. The wailing tones of the sax remind you of Sly and The Family Drone, although the sound here is a little more expressive and upbeat than drone laden (so to speak), more Sly Stone than Sunn O))). Whitaker does an excellent job on drums and keeps a solid foundation for Robertson and Carter to play off. A fantastic opener.

Next we have the longest, most epic track on the EP, the nine and a half minute Wasteland where the momentum is reduced significantly and a more introspective and circumspect style introduced. The track is aptly named and its sombre nature not really very surprising, considering the aforementioned theme of the EP. There is a progressive vibe to the track too (especially towards the end) and one can’t help but envisage Van Der Graff Generator playing Ornette Coleman’s plaintive Lonely Woman.

From the longest track to the shortest, at just over two minutes, Hostiles has an abrasive and confrontational tone which may allude to the protagonist of the album encountering and fending off various adversaries. No wave was a rejection of traditional rock aesthetics and there are certainly no nods to blues or Chuck Berry inspired rock n roll here, if you find yourself hankering for the sounds of konk and James Chance, then you’re in luck with this track.

Arch Nova takes us down a fusion route ala Weather Report and Mahavishnu Orchestra with hints of a psych/space-rock style expansiveness present too. It takes you on a journey and there are moments where you wonder how the track is going to land. This only serves to fuel the sense of excitement and anticipation and ties in nicely with the band themselves wanting to leave the story of our hero open-ended ‘We don’t want to spoil the ending, so as to whether he makes it, you’ll just have to listen and decide for yourselves’. A suitably ambiguous conclusion to the EP.

Odd Circus tap into the world of underground, commercially non-viable music (Zappa, The Residents, solo Mike Patton) which may not appeal to everyone, but for those like myself who have an appreciation for the eccentric then Arch Nova definitely hits the spot.

Clouds Taste Satanic ‘To Sleep Beyond The Earth’ CD/DD 2014 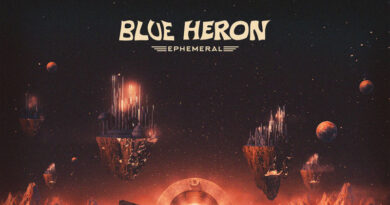