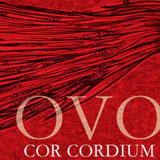 This is, by some distance, the strangest album I’ve ever listened to.

For those unexposed to the Italian duo’s minimalist arrangement, allow me to fill you in: a gigantic man wearing black shorts and a Mexican wrestling-mask stands and thunders a floor tom, a snare and a ride cymbal whilst his rag-wearing, death-masked, female accomplice lays down feedback-drenched bass tones and ghosts this eerie concoction with her terrifying, guttural assault. OvO are truly a multi-genre entity, and at various points on their sixth record approach minimalist black-metal patterns, avant-garde jazz arrangements, Sunn 0))) drone-worship and death n’ roll folk. Stefania Pedretti’s vocals bring to mind the narration of your worst nightmare being shredded by a cheese-grater, and it’s quite obvious from the opening minutes that there doesn’t really exist anything else quite like this in music.

With such a small collection of instruments to abuse, OvO constantly evolve as a multi-headed beast – at times creating a clatter of apocalyptic death-thrash before veering violently into extended passages of synth-driven noise-doom. From the opening moments to the closing abyss, it’s all-too clear that this is a complex and demanding listen – definitely not one to stick on whilst relaxing with a warm brew or cold beer in the bath. Pedretti provides constant mystery to Bruno Dorella’s subtle-to-riotous percussion, her gentle and soulful gypsy-folk tone in ‘Marie’ slowly uncoils into a concrete-cracking roar akin to Angela Gossow going into labour. Similarly, the soft jazzy echoes of ‘Smelling Death Around’ begin with the delicate cooing to be expected of a heavily-fed pigeon, before the song opens up into a barren landscape of wrenching despair.

The pair clearly works well as a Grim-Fandango-esque live concept and the output is genuine and interesting in a beard-stroking kind of way, but I can’t help but wonder how many people actually dig these kinds of niche moods all together in one place. The band are at their most formidable in the rolling death-rock of ‘La Bestia’ and ‘Lungo Computo’, but the squealing spontaneity of the majority of the record is difficult to become accustomed to and enjoy for its entertainment value. Having had the shit scared out of me by seeing the band perform in the flesh, I can assure you that they have no problem captivating an audience, but much of the imagery seems lost in the transition to disk.

Supernatural Cat doesn’t pick up poor acts and I would highly recommend OvO’s death-jazz in the live arena to anyone without a faint-heart, but on this instance I found the offering difficult to handle and ultimately enjoy as a record. If you’re looking for the soundtrack to a murderous rampage, multi-car pile-up or nuclear meltdown, however, look no further.