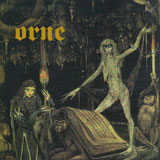 Originally released back in 2006 by Italian label Black Widow, the first vinyl pressing did little justice to the album, mastered as it was from a CD, and so the increasingly-mighty Svart have decided to re-release the LP with a brand-spanking-new mastering job in an expanded form as a double LP, with the extra record serving to allow the original tracks more breathing space and to fit in the three tracks from the bands original demo, A Beginning. All in all, a pretty mouthwatering package.

A reading from a magickal treatise by Warning/40 Watt Sun frontman Patrick Walker opens proceedings with ‘In The Vault’ – and, indeed, also closes them too during the final moments of sprawling endpiece ‘Lighthouse’ – his intimately recorded voice drawing the ear of the listener and soon superseded by a delicately picked acoustic guitar from Kärki, reverberating, watery subdued electric guitar from second guitarist Pekka Pitkälä, subtle percussive touches from Pohjonen and washes and swells of organ from Pirkka Leino, effectively serving as an introductory establisher of mood and intent. Leino’s crunchy, swirling organ carries through into first song proper ‘A Beginning’, soon joined by Hyinnen’s crooning vocal and the saxophone of Jussi Lisko, both softly at first but quickly rising to more strident tones as the guitars assume acid rock tones, Antti Fredriksson’s warm, punchy bass joins the fray and Pohjonen kicks in with full kit. The song rises and falls across its six minutes, at times reminiscent of Van Der Graaf Generator’s masterful ‘Killer’ thanks to the organ and saxophone combo, and shifts across a number of moods and beautifully textured sections, organ and guitars locking together wonderfully behind Hyinnen.

‘Anton’ blooms from Fredriksson’s smooth bass and Leino’s organ into a dreamlike, stately pulsing jazz-rock number, Pitkälä and Kärki’s glassy, spidering guitars crawling across a languid backing rich with saxophone and shimmering effects, Hyinnen emoting clearly in velvety tones that approach Scott Walker’s higher register moments at times – simply sublime. ‘Island Of Joy’ switches between languidity and a sound not unlike a monstrously subdued take on early Iron Maiden, woven through with eerie flute from Lisko and ‘Frontline Dreams’ takes this idea and replaces Maiden with a hypno-fuzz take on Black Sabbath, with Hyinnen adopting a very Ozzy-like vocal pattern, and some tasty Vincent Crane-a-like organ flourishes to boot.

Penultimate number ‘Opening By Watchtower’ follows through with the Atomic Rooster feel and adds in some very occult overtones to Hyinnen’s lyric and vocal approach, the song becoming terse and dramatic as it shifts across its eight minute length, choppy acoustic guitar, fuzz organ and that ghostly flute driven along by Pohjonen’s tumbling percussive beat, exploding into proto-metallic riffing and pulsing bass during the closing few minutes, leading us into the gently phased guitar and bowed cymbals that open closing track ‘Lighthouse’. At twelve minutes, ‘Lighthouse’ is the longest track on The Conjuration By The Fire but it most certainly doesn’t outstay its welcome. Maintaining an oddly jaunty feel throughout and driven by flanging, phasing guitar it has a restlessly shifting rhythmic undertow that pushes and pulls with a tidal flow that eventually ebbs away into Patrick Walker once again intoning magickal formulae, leading us back to where we first came in. A cyclical journey complete.

Orne have constructed an immersive world within the environs of The Conjuration By The Fire and to be lost within it is intoxicating and entrancing, not unlike wandering through a dusty, warmly-lit hall of mirrors. Their take on classic progressive rock is not ‘retro’ – it feels of the time, as opposed to a modern reconstruction of a sound. Warm and genuine in tone, Orne ooze honesty and genuineness that pours out of them and into the music that they make, something that feels like a rarity in this cynical, plastic age.