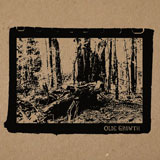 You know the feeling, the “man, I’ve had enough doomy fuzz metal for the time-being” feeling. I was beginning to lose a little bit of faith in the genre – after all, it’s certainly possible to hear album after album of regurgitated riffs, gruff, boring vocals and a huge lack of originality. Then I heard Boston, Massachusetts’s latest amp-spankers, Olde Growth’s self-titled debut.

It’s a rarity to get that face-wide grin after just one listen of an album, let alone before it’s even finished its first spin, but this is precisely what happened to me on hearing this forest-themed monolith. It’s well worth highlighting up-front that Olde Growth is just a two-piece with Ryan Berry pounding the skins and Stephen LoVerme handling the vocals and walls of delicious bass tones. A simple set-up, some may say, but together the duo barrage through a desolate landscape of distorted, and intricate, heaviness, whilst never straying too far from the well-beaten path laid down by the great desert architects, Kyuss. Armed with just bass and drums, LoVerme and Berry have clearly studied ‘Blues For The Red Sun’ well and rebranded it with their own unique take on the misery of the natural world.

‘The Grand Illusion’ wastes no time in setting a galloping pace at the opening of the record. The rolling bass, persistent cymbal smashes and LoVerme’s desperate rasp conjure up imagery of a rapid, painful journey through some ancient time of battle, yet the lyrics set this into reverse gear, as though Olde Growth plan to take war away from mankind using the might of fuzz-induced, boogie riffs alone. ‘Life In The Present’ slows down to a crawling, doom-laden plod before juxtaposing its own opening with a riff-race to accompany a tale of hope and glory in death. These juxtapositions and earth-shifting crescendos are the beating heart of all that is great about this music – Olde Growth have already mastered the ability to crush the eardrums with slabs of misery one minute, and up-tempo ZZ Top wig-outs at the next.

I can’t emphasize enough just how big these mid-song climaxes are. ‘Cry Of The Nazgul / The Second Darkness / To The Black Gate’ is a triple-bill goliath of Tolkien-inspired Earth battle centred around the natural elements of earth, wind, fire and the plague of man. Again, LoVerme and Berry are a tightly honed beast of slow building sludge and clattering chaos, segmented with cleaner passages of single-layer stoner rock. ‘Sequoia’ unleashes a hulking riff that would make Electric Wizard shit themselves, before underlining all their strengths once again – building the bass into a slithering surge of doom before kicking in with some astonishingly beautiful clean interludes. This track is essential to the concept – that of the historic strength of the great sequoia coastal redwood trees – the olde growth. Distorted instrumental tracks ‘Red Dwarf’ and ‘Everything Dies’ slide us over wastelands of thunderous, tribal drumming and multi-layered, meandering bass tones, without LoVerme’s harrowing-to-pleasant vocal supply. This is the ‘Molten Universe’ of their Kyuss homage.

‘Awake’ realigns Olde Growth’s efforts to their final message of intent – subtle acoustics can combine with colossal riffs, rock n’ roll hooks and a stoner croon to demand that the world wake up to the hidden secrets of the universe.

Boxed neatly in 100% recycled materials and adorned by the bleak, ambient cover shot of an elder-wood forest, ‘Olde Growth’ is a good-looking package which stays true to its ethos. I enjoyed this record immensely and would recommend it to anyone out there who likes: their riffs to be destructive yet beautiful, an intelligently written song structure and/or a gloriously fresh take on Kyuss at their most intricate. Olde Growth have planted a big seed with their MeteorCity debut, it will be interesting to see how big their tree can grow.